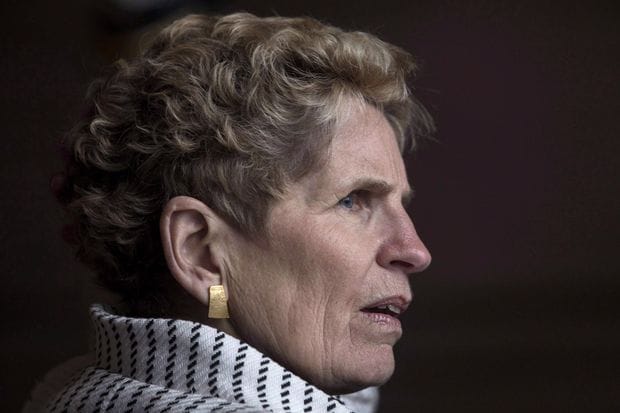 Doug Ford’s promise to fire the CEO of Hydro One if elected this spring shows he has no plan to lead Ontario, Premier Kathleen Wynne said Friday, calling the Tory leader’s pledge little more than “bluster.”

Wynne, whose Liberals face an uphill battle to stay in power, made her comments a day after Ford said his first act as premier would be to fire CEO Mayo Schmidt and the board of directors at Ontario’s largest electricity transmission and distribution provider.

“If this is his policy approach then I think we should all be worried,” Wynne said. “I think that everyone in Ontario should be worried if this kind of sloganeering and bluster, quite frankly, is what is being put forward as policy and as coherent decision-making.”

The newly minted Progressive Conservative leader said he would dump Schmidt because the CEO of the partially privatized utility presided over the dramatic increase of hydro rates in the province and earned a $6.2 million salary last year.

“You can take this to the bank, the CEO’s gone and this board is gone,” Ford told a news conference in Toronto on Thursday. “When we’re in government, we’re going to put an end to the hydro executives getting rich off the taxpayers of this great province.”

On Friday, Wynne noted that Schmidt’s salary was in range with comparable positions, and said Ford’s promise won’t save a single ratepayer in the province “one cent.”

Wynne, whose Liberals have promised billions in new spending to enhance health care and child care in recent weeks, said voters don’t know any of Ford’s priorities yet because he has not released a platform.

“We have no idea about any of his priorities apart from maybe firing one CEO,” she said. “That’s not policy, that’s not a plan. That’s a slogan masquerading as policy.”