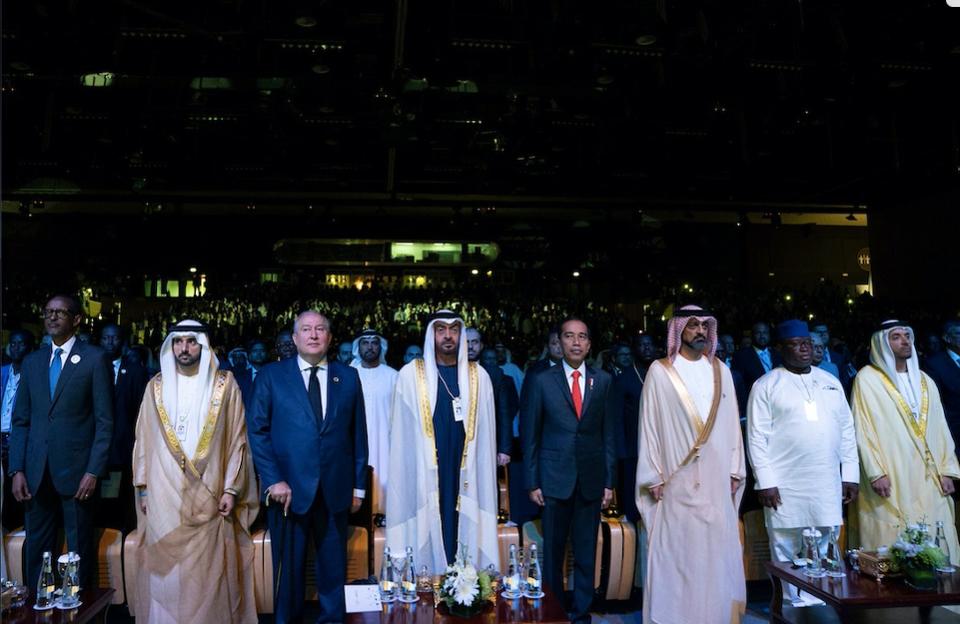 ABU DHABI - The heads-of-state and energy ministers from more than 120 nations just met in Abu Dhabi and they had one thing in common: a passion to increase the use of renewable energy to reduce the threat from global warming — one that will also boost economic output and spread prosperity. Access to finance, though, is critical to this goal.

Indeed, the central message to emerge from the conference hosted by the International Renewable Energy Agency (IRENA) this week in the United Arab Emirates is that an energy transformation is underway that has the potential to revitalize economies and to lift people out of poverty. But such a conversion requires international cooperation and a common desire to address the climate cause.

“The renewable energy sector created jobs employing 11 million people in 2019 and provided off-grid solutions, having helped bring the number of people with no access to electricity to under 1 billion,” the current president of the UN General Assembly Tiijani Muhammad-Bande of Nigeria told the audience.

Today In: Business
While renewables are improving energy access and reducing inequities, they also have the potential to curb CO2 emissions globally. The goal is to shrink them by 45% by 2030 and 90% by 2050. Getting there, though, requires progressive government policies that will help to attract financing.

According to IRENA, investment in the clean energy sector is now at $330 billion a year. But if the 2050 goals are to be reached, those levels must nearly double to $750 billion annually. The green energy sector does not want to compete with the oil and gas sectors but rather, it is seeking to diversify fuel sources — a strategy that could help insulate companies from climate risks. To hit the Paris agreement’s targets, it says that renewable energy deployment must increase by a factor of six.

To that end, IRENA is forming a “climate investment platform” that will bring ideas to the table and then introduce prospective parties. It will focus on those projects that it believes are “bankable.”

It’s about helping project developers find banks, private companies and pension funds to finance their worthy projects, IRENA Director General Francesco La Camera said in response to this reporter’s question. Moreover, he said that the platform would work to ensure there is a sound legal structure and that there is legislative support to “de-risk” the investments.

“Overcoming investment needs for energy transformation infrastructure is one of the most notable barriers to the achievement of national goals,” La Camera says. “Therefore, the provision of capital to support the adoption of renewable energy is key to low-carbon sustainable economic development and plays a central role in bringing about positive social outcomes.”

If the monies are to flow into new projects, governments have to create an environment where innovation is to be rewarded: tax incentives for renewables along with the design and implementation of transition plans. The aim is to scale up which in turn, leads to new jobs and greater economic productivity — a payback of three-to-seven times the initial investment.

The path of least resistance, for now, is off-grid green energy solutions, or providing electricity to rural areas by installing solar panels that may connect to localized microgrids. Africa, which has a half-billion people without reliable electricity, would benefit. However, “If you want to go to scale and have bankable projects, you have to be connected to the grid,” Moira Wahba, with the UN Development Program, told this writer. “That requires large capital and private enterprise.”

Public policy must thus work to create the knowledge base and the advocacy to help de-risk the investments. Government’s role is to reassure investors that they will not be subject to arbitrary laws or the crony allocation of contracts. Risk takers know there are no guarantees. But they want to compete on a level playing.

He is speaking during the World Energy Future Summit.
Sultan Al Jabber, chief executive of Abu Dhabi’s national oil company, Adnoc, who is also the former ... [+]ABU DHABI SUSTAINABILITY WEEK
How do foreign investors square the role of utilities that are considered safe and sound with their potential expansion into new fields and in new places? The elimination of risk is not possible, says Mohamed Jameel Al Ramahi, chief executive officer of UAE-based Masdar. But the need to decarbonize is paramount. The head of the renewable energy company says that every jurisdiction has its own risk profile but that each one must be fully transparent while also properly structuring their policies and regulations. And there needs to be insurance for political risks.

The United States and China, for example, are already “de-risked,” because they are deploying “gigawatts of renewables,” he told this writer. “When we talk about doubling the amount of needed investment, we have to take into account the risk profile of the whole world. If it is a high-risk jurisdiction, it will be difficult to bring in foreign capital.”

The most compelling factor that will drive investment is whether the global community can comply with the Paris agreement, says Dr. Thani Ahmed Al Zeyoudi, Minister of the Ministry of Climate Change and the Environment for the United Arab Emirates. The goal is to limit increases to 2 degrees Celsius by mid-century, with the understanding that the UN’s latest climate report emphasizes that positive results are urgently needed.

One of the most effective mechanisms is the public-private model. Governments, for example, are signing long-term power purchase agreements, giving project developers the necessary income they need to operate. They can also provide grants and bring in international partners such as the World Bank.

“We are seeing the impact of climate change with the various extreme events: the Australian fires, the cyclones and the droughts,” the minister told reporters. “We can no longer pass this to future generations to deal with.”

The United Arab Emirates is not just talking about it, adds Sultan Al Jabber, chief executive of Abu Dhabi’s national oil company, Adnoc, who is also the former head of subsidiary Masdar. It is acting now. His comments came during Abu Dhabi’s Sustainability Week at the World Future Energy Summit. The country is “walking the walk” by investing in renewable projects around the globe and it is growing its own green energy portfolio. Addressing climate change is “right” while it is also making “perfect economic sense.”

The green energy transition has taken root in advanced economies while it is making inroads in the developing world — a movement that has the twin effect of addressing climate change and creating economic opportunities. But private investment must double, which requires proactive governments to limit unnecessary risks and to craft the incentives to attract risk-takers.