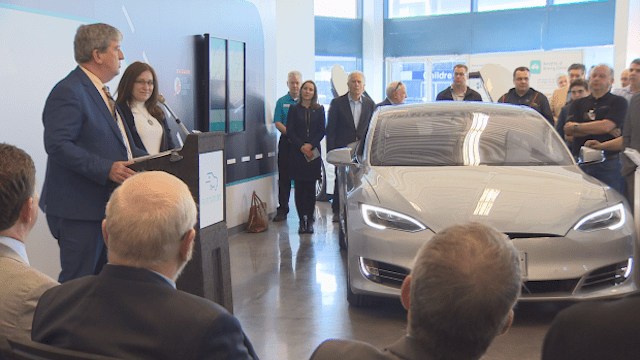 TORONTO - A centre where people can learn about electric vehicles and take them for a test drive has opened in Toronto.

Ontario's Environment Minister Glen Murray says the Plug'n Drive Electric Vehicle Discovery Centre is considered the first of its kind and his government has pitched in $1 million to support it.

Murray says the goal of the centre is to convince people to switch to electric vehicles in order to fight climate change.

Visitors to the centre learn about how electric vehicles work and about Ontario government subsidies and rebates for electric car owners.

Visitors can test-drive vehicles from different companies and those who see something they like will receive a referral to an electric car dealership in their area.

The province hopes to have electric vehicles make up five per cent of all new vehicles sold by 2020. (Oliver Walters/CBC)

The Ontario government's Climate Change Action Plan includes a goal to have electric vehicles make up five per cent of all new vehicles sold by 2020 and the discovery centre is part of that plan.

The centre is free for visitors. It's a public-private partnership funded from the provincial government's cap-and-trade revenue, with other funding from TD Bank Group, Ontario Power Generation, Power Workers' Union, Toronto Hydro and Bruce Power.