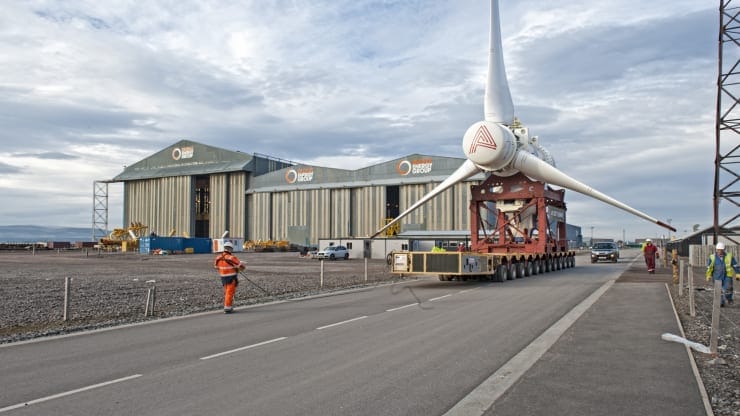 GLASGOW - A tidal power project in waters off the north coast of Scotland sent more than 13.8 gigawatt hours (GWh) of electricity to the grid last year, according to an operational update issued Monday. This figure – a record – almost doubled the previous high of 7.4 GWh in 2018.

In total, the MeyGen tidal stream array has now exported more than 25.5 GWh of electricity to the grid since the start of 2017, according to owners Simec Atlantis Energy. Phase 1A of the project is made up of four 1.5 megawatt (MW) turbines.

The 13.8 GWh of electricity exported in 2019 equates to the average yearly electricity consumption of roughly 3,800 “typical” homes in the U.K., according to the company, with revenue generation amounting to £3.9 million ($5.09 million).

Onshore maintenance is now set to be carried out on the AR1500 turbine used by the scheme, with Atlantis aiming to redeploy the technology in spring.

In addition to the production of electricity, Atlantis is also planning to develop an “ocean-powered data centre” near the MeyGen project.

The European Commission has described “ocean energy” as being both abundant and renewable. It’s estimated that ocean energy could potentially contribute roughly 10% of the European Union’s power demand by the year 2050, according to the Commission.

While tidal power has been around for decades — EDF’s 240 MW La Rance Tidal Power Plant in France was built as far back as 1966 — recent years have seen a number of new projects take shape.

In December last year, Scottish tidal energy business Nova Innovation was issued with a permit to develop a project in Nova Scotia, Canada.

In an announcement at the time, the firm said a total of 15 tidal stream turbines would be installed by the year 2023. The project, according to the firm, will produce enough electricity to power 600 homes.

Elsewhere, a business called Orbital Marine Power is developing what it describes as the “world’s most powerful tidal turbine.”

The company says the turbine will have a swept area of more than 600 square meters and be able to generate “over 2 MW from tidal stream resources.” It will use a 72-meter-long “floating superstructure” to support two 1 MW turbines.