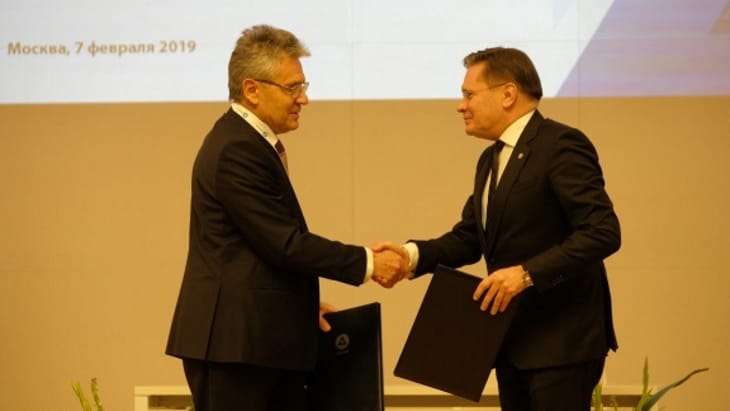 Sergeev (left) and Likhachov (right) at the signing ceremony

MOSCOW - Russian state atomic energy corporation Rosatom and the Russian State Academy of Sciences are to cooperate on joint scientific, technical and innovative activities in areas including nuclear energy, nuclear medicine and other areas under an agreement signed in Moscow on 7 February.

The cooperation agreement was signed by Rosatom Director General Alexei Likhachov and President of the Russian Academy of Sciences Alexander Sergeev during a joint meeting to mark Russian Science Day. Under its terms, the partners will cooperate in organising research and development activities aimed at providing technological advantages in various sectors of the domestic industry, as well as creating and developing interdisciplinary scientific and technological centres and organisations. They will also jointly develop strategic planning documents, improve the technical and scientific regulatory and legal framework, and carry out expert evaluations of scientific and technical projects and scientific consultations.

Likhachov said joint activities between Rosatom and the Academy would strengthen the Russian nuclear industry's "leadership" in the world and allow the creation of new technologies that would shape the future image of the nuclear industry in Russia. "Within the framework of the Agreement, we intend to expand work on the entire spectrum of advanced scientific research. The most important direction of our cooperation will be the integration of fundamental, exploratory and applied scientific research, including in the interests of the development of the nuclear industry. We will work together to form the nuclear energy industry of the future, to create new materials, new radiation technologies,” he said.

Sergeyev noted the "rich history" of cooperation between the Academy of Sciences and the nuclear industry. “All major projects in the field of military and peaceful nuclear energy were carried out jointly by scientists and specialists of our organisations, which largely ensured their timeliness and success," he said.