After Quakes, Puerto Rico's Electricity Is Back On For Most, But Uncertainty Remains 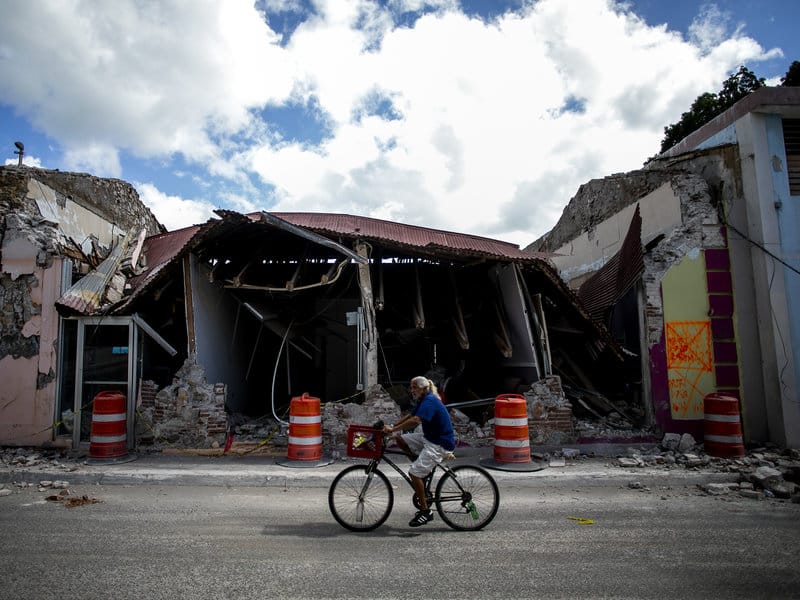 A cyclist rides past a destroyed building in Guanica, Puerto Rico. The island was hit by a series of earthquakes over the past couple of weeks

PUERTO RICO - Some in Puerto Rico are beginning to fear the ground will never stop shaking. The island has been pummeled by hundreds of earthquakes in recent weeks, including the recent 5.9 magnitude temblor, where there were reports of landslides in the town of Peñuelas along the southern coast, rattling residents already on edge from the massive 6.4 magnitude quake.

That was the largest to strike the island in more than a century causing hundreds of structures to crumble, forcing thousands from their homes and leaving millions without power. One person was killed and several others injured.

Utility says 99% of customers have electricity

Puerto Rico's public utility, PREPA, tweeted some welcome news Monday: that nearly all of the homes and businesses it serves have had electric power restored. Still it is urging customers to conserve energy.

He also reports many residents are still reeling from the devastation caused by Hurricane Maria, a deadly Category 4 storm that battered the island in September 2017. The storm exposed the fact that buildings across the island were not up to code. The series of earthquakes are only amplifying fears that structures have been further weakened.

Florido spoke to one displaced resident, Leticia Espada, who said more than 50 homes in her town of Guayanilla, about an hour drive east of the port city of Ponce, had collapsed.

After sleeping outside for days on her patio following Tuesday's quake, she eventually came to her town's baseball stadium where she's been sleeping on one of hundreds of government-issued cots.

She's like so many others sleeping in open-air shelters, many unwilling to go back to their homes until they've been deemed safe.

"Thousands of people across several towns sleeping in tents or under tarps, or out in the open, protected by nothing but the shade of a tree with no sense of when these quakes are going to stop," Florido reports.