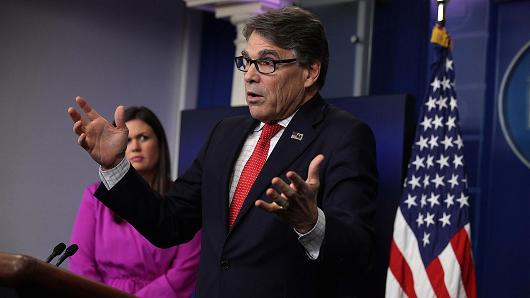 WASHINGTON - A coalition of 11 industry groups is pushing back on Energy Secretary Rick Perry's efforts to quickly implement a major change to the way electric power is priced in the United States.

The Energy Department on Friday proposed a rule that stands to bolster coal and nuclear power plants by forcing the regional markets that set electricity prices to compensate them for the reliability they provide. Perry asked the Federal Energy Regulatory Commission to consider and finalize the rule within 60 days, including a 45-day period during which stakeholders can issue comments.

On Monday, groups representing petroleum, natural gas, electric power and renewable energy interests urged FERC to reject the expedited process, as well as the Department of Energy's request that the regulatory commission consider putting in place an interim rule.

They say the time frame is "aggressive" and the department didn't provide adequate justification for fast-tracking a process that could have huge impacts on wholesale electricity markets.

"This is one of the most significant proposed rules in decades related to the energy industry and, if finalized, would unquestionably have significant ramifications for wholesale markets under the Commission's jurisdiction," the groups said in the motion filed with FERC.

"The Energy Industry Associations urge the Commission to reject the proposed unreasonable timelines and instead proceed in a manner that would afford meaningful consideration of public comments and be consistent with the normal deliberative process that it typically affords such major undertakings," they said.

The groups are requesting a 90-day comment period, as well as another period for reply comments. FERC, which has authority to regulate interstate transmission and sale of electricity and natural gas, is not required to decide in favor of the rule but must consider it.

Expediting the process or imposing an interim rule is generally limited to emergencies, the groups said. The Energy Department's letter to FERC does not even attempt to establish that an immediate threat to U.S. electricity reliability exists, they allege.

The groups cite a recent Energy Department report on grid reliability that concluded: "reliability is adequate today despite the retirement of 11 percent of the generating capacity available in 2002, as significant additions from natural gas, wind, and solar have come online since then."

The Department of Energy did not return a request for comment.

The Energy Department's rule marks a flashpoint in the battle between natural gas-fired and renewable energy and so-called baseload power sources like coal and nuclear.

Gas, wind and solar power have eaten into coal and nuclear's share of U.S. electric power generation in recent years. That is thanks to a boom in U.S. gas production that has pushed down prices, the rapid adoption of subsidized renewable energy and President Barack Obama's efforts to mitigate emissions from power plants.

Electric power is priced in deregulated, wholesale markets in many parts of the country. Utilities typically draw on the cheapest power sources first.

Some worry that the retirement of coal-fired and nuclear power plants undermines the nation's ability to reliably and affordably deliver electricity to households and businesses.

President Donald Trump has vowed to revive the ailing coal industry. Trump, Perry and other administration officials reject the consensus among climate scientists that carbon emissions from sources like coal-fired plants are the primary cause of global warming.