Cost of US nuclear generation at ten-year low 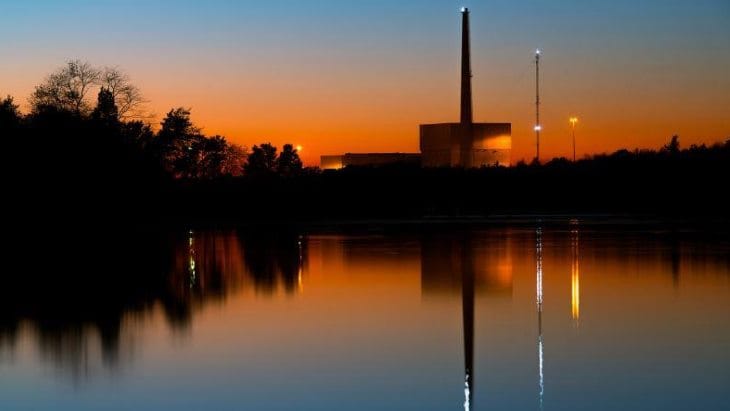 Oyster Creek closed in September after 49 years of operation

WASHINGTON - Average total generating costs for nuclear energy in 2017 in the USA were at their lowest since 2008, according to a study released by the Nuclear Energy Institute (NEI).

The report, Nuclear Costs in Context, found that in 2017 the average total generating cost - which includes capital, fuel and operating costs - for nuclear energy was USD33.50 per megawatt-hour (MWh). This is 3.3% lower than in 2016 and more than 19% below 2012's peak. The reduction in costs since 2012 is due to a 40.8% reduction in capital expenditures, a 17.2% reduction in fuel costs and an 8.7% reduction in operating costs, the organisation said.

The year-on-year decline in capital costs over the past five years reflects the completion by most plants of efforts to prepare for operation beyond their initial 40-year licence. A few major items - a series of vessel head replacements; steam generator replacements and other upgrades as companies prepared for continued operation, and power uprates to increase output from existing plants - caused capital investment to increase to a peak in 2012. "As a result of these investments, 86 of the [USA's] 99 operating reactors in 2017 have received 20-year licence renewals and 92 of the operating reactors have been approved for uprates that have added over 7900 megawatts of electricity capacity. Capital spending on uprates and items necessary for operation beyond 40 years has moderated as most plants are completing these efforts," it says.

Since 2013, seven US nuclear reactors have shut down permanently and another 12 have announced their permanent shutdown. The early closure for economic reasons of reliable nuclear plants with high capacity factors and relatively low generating costs will have long-term economic consequences, the report warns: replacement generating capacity, when needed, will produce more costly electricity, fewer jobs that will pay less, and more pollution, it says.

NEI Vice President of Policy Development and Public Affairs John Kotek said the "hardworking men and women of the nuclear industry" had done an "amazing job" reducing costs through the institute's Delivering the Nuclear Promise campaign and other initiatives. "As we continue to face economic headwinds in markets which do not properly compensate nuclear plants, the industry has been doing its part to reduce costs to remain competitive," he said.

"Some things are in urgent need of change if we are to keep the nation's nuclear plants running and enjoy their contribution to a reliable, resilient and low-carbon grid. Namely, we need to put in place market reforms that fairly compensate nuclear similar to those already in place in New York, Illinois and other states," Kotek added.

Cost information in the study was collected by the Electric Utility Cost Group with prior years converted to 2017 dollars for accurate historical comparison.