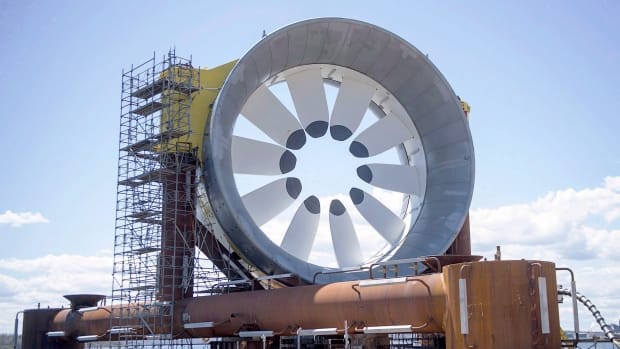 A turbine for the Cape Sharp Tidal project is seen at the Pictou Shipyard in Pictou, N.S., on May 19, 2016.

HALIFAX - Nova Scotia's energy minister says a massive, experimental in-stream tidal turbine can't be allowed to sit at the bottom of the Bay of Fundy for an extended period of time.

Derek Mombourquette said Thursday the province is monitoring developments as questions remain about the future of the Cape Sharp Tidal turbine project.

Cape Sharp is a joint venture between OpenHydro, which is now in the midst of bankruptcy protection, and Halifax-based Emera Inc.

"This can't go on forever," Mombourquette said. "They (creditors and remaining partners) have indicated that they are implementing a contingency plan and I'm looking forward to what that plan is going to be."

Mombourquette said he plans to meet with Emera officials, but he wouldn't put a timeline on the province's patience as the regulator of the project, adding that its operating licence is still in place.

"Right now our focus is on the environment and the safe operation of the turbine and ensuring those processes are in place," he said.

Mombourquette also wouldn't say whether the province would be on the hook for the removal if the creditors aren't interested in dealing with the turbine.

"We'll go down that road when the time comes," he said. "There's no public money specifically in that turbine."

Cape Sharp's first turbine was connected to the grid in November 2016, but it was later removed for inspections and servicing in June of last year.

An in-stream prototype was torn apart in 2009 by the bay's powerful currents, which can move at 18 kilometres per hour.

OpenHydro's bankruptcy was prompted by Paris-based Naval Energies' decision to pull funding from its Dublin-based subsidiary.

In a statement issued last month, Naval Energies said it had stopped investing in tidal energy in Canada and in other locations, to focus on floating wind turbines and ocean thermal technology.