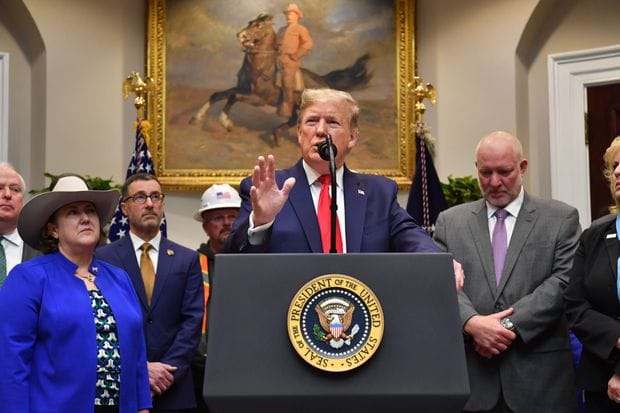 The president, during remarks at the White House with supporters and Cabinet officials, said he wanted to fix the nation’s “regulatory nightmare” through new guidelines for implementing the National Environmental Policy Act.

“America is a nation of builders,” he said. But it takes too long to get a permit, and that’s “big government at its absolute worst.”

The Council on Environmental Quality has not updated the implementing rules in decades, and both energy companies and environmentalists want them reworked. But they patently disagree on how to change the rules.

A central fight surrounds whether the government considers climate change concerns when analyzing a project.

Environmentalists want agencies to look more at “cumulative” or “indirect” impacts of projects. The Trump plan shuts the door on that.

“Analysis of cumulative effects is not required,” the plan states, adding that CEQ “proposes to make amendments to simplify the definition of effects by consolidating the definition into a single paragraph.”

CEQ Chairwoman Mary Neumayr told reporters during a conference call that definitions in the current rules were the “subject of confusion.”

The proposed changes, she said, do in fact eliminate the terms “cumulative” and “indirect,” in favor of more simplified language.

Effects must be “reasonably foreseeable” and require a “reasonably close causal relationship” to the proposed action, she added. “It does not exclude considerations of greenhouse gas emissions,” she said.

Environmentalists scoffed and said the proposed guidance failed to incorporate the latest climate science and look at how projects could be more resilient in the face of severe weather and sea-level rise.

The proposed NEPA rules released today include provisions to codify the proposed guidance, which has also been years in the making.

Senior administration officials sought to downplay the effect of the proposed NEPA rules by noting the underlying statute will remain the same.

“If it required NEPA yesterday, it will require NEPA under the new proposal,” an official said when asked how the changes might apply to pipelines like Keystone XL.

And yet the proposed changes could alter the “threshold consideration” that triggers NEPA review. The proposal would exclude projects with minimal federal funding or “participation.”

Neumayr said the average EIS takes 4 ½ years and in some cases longer. Democrats have disputed those timelines. Further, just 1% of all federal actions require an EIS, they argue.

The proposal would also require one agency to take the lead on permitting and require agency officials to “timely resolve disputes that may result in delays.”

In general, the plan calls for environmental documents to be “concise” and “serve their purpose of informing decision makers.”

Both Interior Secretary David Bernhardt and EPA Administrator Andrew Wheeler were at the White House for the announcement.

An onslaught of critics have said changes to NEPA rules could be the administration’s most far-reaching environmental rollback.

The League of Conservation Voters declared the administration was again trying to “sell out the health and well-being of our children and families to corporate polluters.”

On Capitol Hill, House Speaker Nancy Pelosi (D-Calif.) said during a news conference the administration would “no longer enforce NEPA.”

“This means more polluters will be right there, next to the water supply of our children,” she said. “That’s a public health issue. Their denial of climate, they are going to not use the climate issue as anything to do with environmental decisionmaking.”

Sen. Sheldon Whitehouse (D-R.I.) echoed the sentiment, saying he didn’t need any more proof that the fossil fuel industry had hardwired the Trump administration “but we got it anyway.”

Energy companies, including firms focused on renewable energy development, are welcoming the “clarity” of the proposed NEPA rules.

“The lack of clarity in the existing NEPA regulations has led courts to fill the gaps, spurring costly litigation, and has led to unclear expectations, which has caused significant and unnecessary delays for infrastructure projects across the country,” the Interstate Natural Gas Association of America said in a statement.

Trump has famously attacked the wind energy industry for decades, dating back to his opposition to a Scottish wind turbine near his golf course.

The president today said he won’t stop until “gleaming new infrastructure has made America the envy of the world again.”

When asked whether he thought climate change was a “hoax,” as he once tweeted, he said no. “Nothing’s a hoax about that,” he said.

The president said there’s a book about climate he’s planning to read. He said, “It’s a very serious subject.”