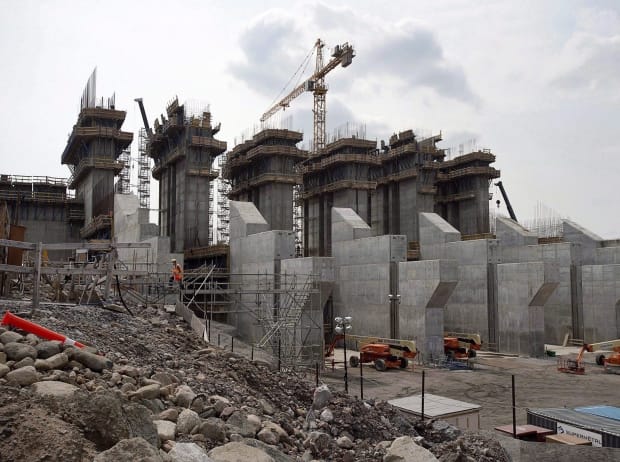 The construction site of the hydroelectric facility at Muskrat Falls, Newfoundland and Labrador

The independent inquiry, led by provincial Supreme Court Justice Richard LeBlanc, is looking into cost and schedule overruns of the $12.7-billion dam on the Lower Churchill River.

Peter O'Flaherty, a lawyer for Premier Dwight Ball, was among the last to speak Thursday, reiterating the premier's position that his Liberal government had no choice but to finish the project after being elected in 2015.

O'Flaherty also addressed ongoing scrutiny as to why Ball's government failed to approve work that would mitigate the impacts of methylmercury contamination in food sources downstream from the reservoir, which is currently being flooded.

He maintained that the premier wanted the work, known as capping, to get done but was unaware that time had run out to complete the capping without the whole project falling further behind schedule.

LeBlanc asked O'Flaherty why it took so long for the government to act.

"Clearly the political fallout is very negative," the judge said. "This is an item that was of significance to the premier, and yet it didn't happen. It's a bit confounding."

O'Flaherty said approving a work permit for the capping fell to the environment minister and that it would be unfair to attribute motives.

The exchange in Happy Valley-Goose Bay came at the end of a week of final submissions from lawyers for politicians, project executives, contractors and interest groups.

The 824-megawatt hydroelectric dam, being developed by the Crown-owned Nalcor Energy, will send power to Newfoundland and later Nova Scotia through subsea cables.

The project, called a "boondoggle" by Nalcor's current CEO, has essentially doubled its costs since it was sanctioned in 2012 and is now years behind schedule.

Hearings began last September, as high-level officials and consultants took the stand, with some evidence suggesting costs were intentionally downplayed.

Public sessions of the inquiry may have concluded, but political headaches over the Muskrat Falls project -- which accounts for one-third of the province's direct and indirect debt -- are far from over.

Fears that ratepayers will bear the financial burden of the project through their electricity bills when Muskrat Falls begins providing all of Newfoundland's power in 2021 has made rates into a pressing issue for the Liberal minority government.

Rate mitigation was the most important item on the agenda when Ball and Prime Minister Justin Trudeau met in St. John's last week, according to the premier. The province has reported it will require at least $200 million in federal funds to avoid rate hikes.

Muskrat Falls was also cited in a report from Moody's Investors Service last month in which the agency downgraded the province's credit rating.

LeBlanc's final report on the inquiry is expected by Dec. 31. He said on Thursday that he intends to meet his tight deadline without requesting an extension. "The pressure is on, and I'm certainly feeling it," he said.