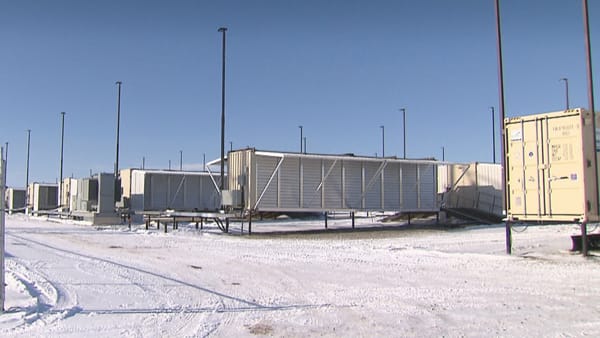 The City of Medicine Hat has agreed to supply electricity and lease land to a Toronto-based cryptocurrency mining company in a deal that will see $100 million in construction spending in the southern Alberta city.

The city will provide electric energy capacity of about 42 megawatts to Hut 8 Mining Corp., which will construct bitcoin mining facilities near the city's new Unit 16 power plant.

The operation is expected to be running by September and will triple the company's operating power to 60.7 megawatts, Hut 8 said.

"The signing of the electricity supply agreement and the land lease represents a key component in achieving our business plan for the roll-out of our BlockBox Data Centres in low-cost energy jurisdictions," said the company's board chairman, Bill Tai, in a release.

In bitcoin mining operations, rows upon rows of power-consuming computers are used to solve mathematical puzzles in exchange for bitcoins and confirm crytopcurrency transactions. The verified transactions are then added to the public ledger known as the blockchain.

Hut 8's existing 18.7-megawatt mining operation at Drumheller, Alta. — a gated compound filled with rows of shipping containers housing the computers — has so far mined 750 bitcoins. Bitcoin was trading Tuesday morning for about $11,180.

Medicine Hat Mayor Ted Clugston says the deal is part of the city's efforts to diversify its economy.

We've made economic development a huge priority down here because we were hit very, very hard by the oil and gas decline," he said, noting that being the generator and vendor of its own electricity puts the city in a uniquely good position.

Hut 8 says construction of the facility is starting right away and will create about 100 temporary jobs. The project is expected to be finished by the third-quarter of this year.