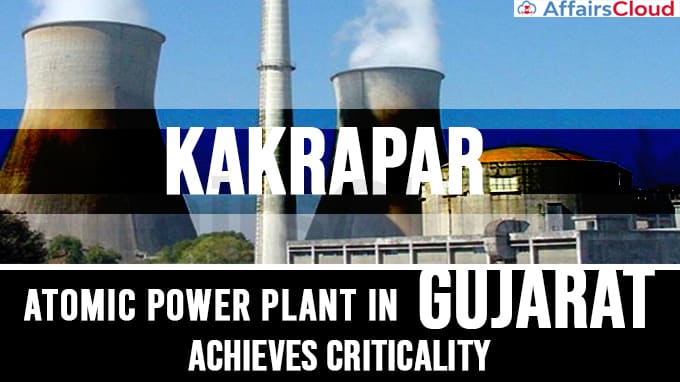 Prime Minister Narendra Modi congratulated nuclear scientists, saying the reactor is a shining example of the 'Make in India' campaign and a trailblazer for many such future achievements.

India developed its own nuclear power generation technology as it faced sanctions from the international community following its first nuclear weapons test in in 1974. It has not signed the Nuclear Non-Proliferation Treaty. India has developed a three-stage nuclear programme based on a closed-fuel cycle, where the used fuel of one stage is reprocessed to produce fuel for the next stage.

Kakrapar 3 was developed and is operated by state-owned Nuclear Power Corporation of India Ltd (NPCIL). The first two units are 220MWe PHWRs commissioned in 1993 and 1995. NPCIL said in a statement that the components and equipment for Kakrapur 3 were “manufactured by lndian industries and the construction and erection was undertaken by various lndian contractors”.

Fuel loading was completed by mid-March. “Thereafter, many tests and procedures were carried out during the lockdown period following all COVlD-19 guidelines.”

“As a next step, various experiments / tests will be conducted and power will be increased progressively.” Kakrapur 3 will be connected to the western grid and will be India’s 23rd nuclear power reactor.

Kakrapur 3 “is the front runner in a series of 16 indigenous 700MWe PHWRs which have been accorded administrative approval and financial sanction by the government and are at various stages of implementation”. Five similar units are under construction at Kakarapur 4, Rajasthan 7&8 and Gorakhpur1&2.

DAE said in January 2019 that India planned to put 21 new nuclear units with a combined generating capacity of 15,700MWe into operation by 2031, including ten indigenously designed PHWRs.