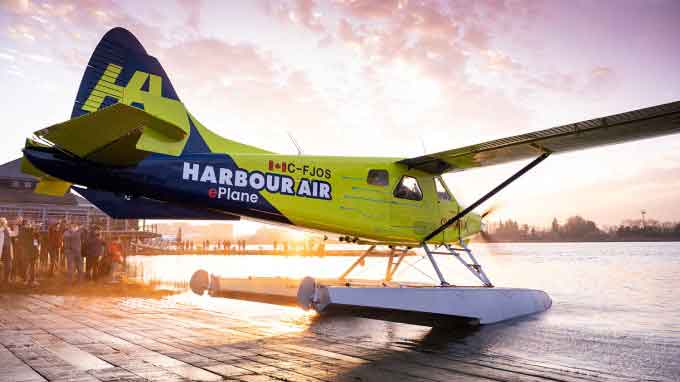 VANCOUVER - A seaplane airline in Vancouver says it has achieved a new goal in its development of an electric aircraft.

Harbour Air Seaplanes said in a release that it completed its first direct point-to-point test flight on Wednesday by flying 74 kilometres in 24 minutes from a terminal on the Fraser River near Vancouver International Airport to a bay near Victoria International Airport.

In the last few years it has turned its attention to becoming a leader in green urban mobility, which would do away with the need to burn fossil fuels, a major contributor to climate change, for air travel.

In December 2019, a pilot flew one of Harbour Air's planes — a more than 60-year-old DHC-2 de Havilland Beaver floatplane that had been outfitted with a Seattle-based company's electric propulsion system, magniX — for three minutes over Richmond.

Since then, the company has continued to fine-tune the plane and conduct test flights in order to meet federally regulated criteria, showing it can safely fly with passengers.

"Having this electric aircraft be able to prove that it can do scheduled flights, it moves us that step closer to being able to completely convert our entire fleet to electric," she said.

All the test flights so far have been made with only a pilot on board.

Vancouver seaplane company to resume test flights with electric commercial airplane
The ePlane will stay in Victoria for the weekend as part of an open house put on by the B.C. Aviation Museum before returning to Richmond.

A yellow seaplane flies over a body of water with the Vancouver skyline visible in the background.
A prototype all-electric floatplane made by B.C.'s Harbour Air Seaplanes on a test flight in Vancouver in 2021. (Harbour Air Seaplanes)
Early in Harbour Air's undertaking to develop an all-electric airplane, experts who study the aviation sector said Harbour Air would have to find a way to make the plane light enough to carry heavy lithium batteries and passengers, without exceeding weight limits for the plane.

Werner Antweiler, a professor of economics at UBC's Sauder School of Business who studies the commercialization of novel technologies around mobility, said in 2021 that Harbour Air's challenge would be proving to regulators that the plane was safe to fly and the batteries powerful enough to complete short-haul flights with power to spare.

In April 2021 Harbour Air partnered with Swiss company H55 to incorporate its battery technology to limit weight and improve the distance the plane could fly.

Shawn Braiden, a vice-president with Harbour Air, said the company is trying to get as much power as possible from the lightest possible batteries.

In December, Harbour Air announced it had begun work on converting a second de Havilland Beaver to an all-electric airplane, copying the original prototype.

The plan is to retrofit version two of the ePlane with room for a pilot plus three passengers. If certified for commercial use, it could become one of the first all-electric commercial passenger planes operating in the world.

Seth Wynes, a post-doctoral fellow at Concordia University who has studied how to de-carbonize the aviation industry, said Harbour Air's progress on its eplane project won't solve the pollution problem of long-haul flights, but could inspire other short-haul airlines to follow suit.

"It's also just really helpful to pilot these technologies and get them going where they can be scaled up and used in a bunch of different places around the world," he said. "So that's why Harbour Air making progress on this front is exciting."