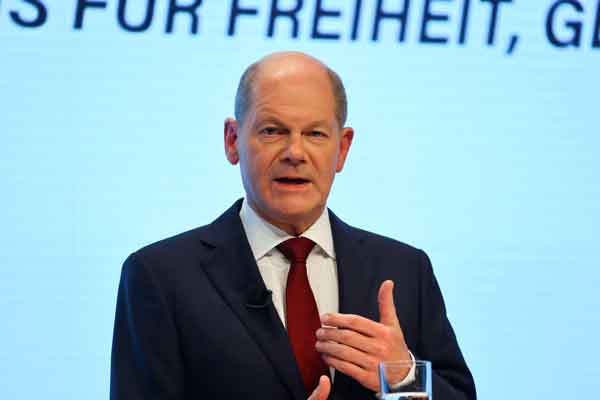 BERLIN - German Chancellor Olaf Scholz set out a 200 billion euro ($194 billion) "defensive shield", including a gas price brake and a cut in sales tax for the fuel, to protect companies and households from the impact of soaring energy prices.

Europe's biggest economy is trying to cope with surging gas and electricity costs caused largely by a collapse in Russian gas supplies to Europe, which Moscow has blamed on Western sanctions following its invasion of Ukraine in February.

"Prices have to come down, so the government will do everything it can. To this end, we are setting up a large defensive shield," said Scholz.

Under the plans, to run until spring 2024, the government will introduce an emergency price brake on gas, the details of which will be announced next month. It is scrapping a planned gas levy meant to help firms struggling with high spot market prices.

A temporary electricity price brake will subsidise basic consumption for consumers and small and medium-sized companies. Sales tax on gas will fall to 7% from 19%.

In its efforts to cut its dependence on Russian energy, Germany is also promoting the expansion of renewable energy and developing liquefied gas terminals.

To help households and companies weather any winter supply disruption, especially in southern Germany, two nuclear plants previously due to close by the end of this year will be able to keep running until spring 2023.

The package will be financed with new borrowing this year, as Berlin makes use of the suspension of a constitutionally enshrined limit on new debt of 0.35% of gross domestic product.

Finance Minister Christian Lindner has said he wants to comply with the limit again next year.

Lindner, of the pro-business Free Democrats (FDP) who share power with Scholz's Social Democrats and the Greens, said on Thursday the country's public finances were stable.

"We can put it no other way: we find ourselves in an energy war," said Lindner. "We want to clearly separate crisis expenditure from our regular budget management, we want to send a very clear signal to the capital markets."

He also said the steps would act as a brake on inflation, which hit its highest level in more than a quarter of century in September.

"It gives industry and citizens confidence that we can get through the winter," he said.