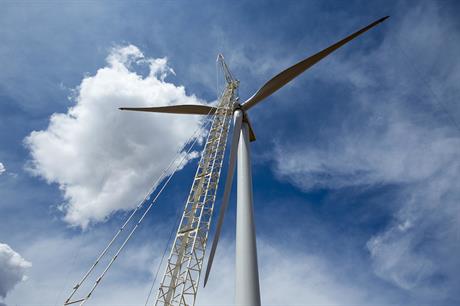 WASHINGTON - A GE turbine collapsed at a wind farm in north-east Brazil, injuring a worker and sparking a probe into the fifth such incident this year, the manufacturer confirmed.

One of the manufacturer’s GE 2.72-116 turbines collapsed at Omega Energia’s Delta VI project in Maranhão, which was commissioned in 2018.

Three GE employees were on site at the time of the collapse on Tuesday (3 September), the US manufacturer confirmed.

One worker was injured and is currently receiving medical treatment, GE added.

"We are working to determine the root cause of this incident and to provide proper support as needed," it said

The turbine collapse in Brazil is the fifth such incident involving GE turbines this year.

The New Mexico incident was followed by another collapse in the US — this time a GE 2.4-107 unit at Tradewind Energy’s Chisholm View 2 project in Oklahoma on 21 May.

Two GE turbines then collapsed at projects in July: a 2.5-116 unit at Invenergy’s Upstreamwind farm in Nebraska on 5 July, followed by a 1.7-103 model at the Actis Group-owned Ventos de São Clemente complex in Pernambuco, north-eastern Brazil.

No employees were injured in the first four turbine collapses of the year.

In response to the latest incident, GE Renewable Energy added: "It is too early to speculate about the root cause of this week’s turbine collapse.

"Based on our learnings from the previous turbine collapses, we have teams in place focused on containing and resolving these issues quickly, to ensure the safe and reliable operation of our turbines."