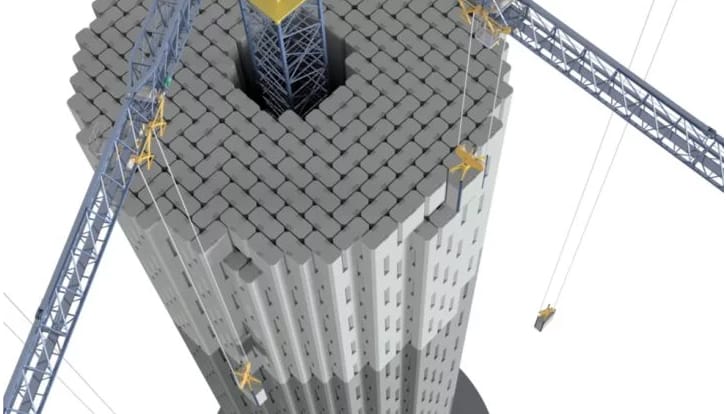 The investment is large by the standards of most startups

BERN - Energy Vault, the Swiss-U.S. startup that says it can store and discharge electrical energy through a super-sized concrete-and-steel version of a child’s erector set, has landed a $110 million investment from Japan’s SoftBank Vision Fund to take its technology to commercial scale.

Energy Vault, a spinout of Pasadena-based incubator Idealab and co-founded by Idealab CEO and billionaire investor Bill Gross, unstealthed in November with its novel approach to using gravity to store energy.

Simply put, Energy Vault plans to build storage plants — dubbed “Evies” — consisting of a 35-story crane with six arms, surrounded by a tower consisting of thousands of concrete bricks, each weighing about 35 tons.

This plant will “store” energy by using electricity to run the cranes that lift bricks from the ground and stack them atop of the tower, and “discharge” energy by reversing that process. It’s a mechanical twist on the world’s most common energy storage technology, pumped hydro, which “stores” energy by pumping water uphill, and lets it fall to spin turbines when electricity is needed.

But behind this simplicity lies some heavy-duty software to orchestrate the cranes and blocks, with a "unique stack of proprietary algorithms" to balance energy supply and demand, volatility, grid stability, weather elements and other variables.

CEO and co-founder Robert Piconi said in a November interview with GTM that the standard array would deliver 4 megawatts/35 megawatt-hours of storage, which translates to nearly 9 hours of duration — the equivalent of building the tower to its height, and then reducing it to ground level. It can be built on-site in partnership with crane manufacturers and recycled concrete material, and can run fully automated for decades with little deterioration, he said.

And the cost, which Piconi pegged in the $200 to $250 per kilowatt-hour range, with room to decline further, is roughly 50 percent below the upfront price of the conventional storage market today, and 80 percent below it on levelized cost, he said.

The result, according to Wednesday’s statement, is a technology that could allow “renewables to deliver baseload power for less than the cost of fossil fuels 24 hours a day.”

Wednesday’s announcement builds on a recent investment from Mexico's Cemex Ventures, the corporate venture capital unit of building materials giant Cemex, along with a promise of deployment support from Cemex's strategic network. Piconi said in November that the company had sufficient investment from two funding rounds to carry it through initial customer deployments, though he declined to disclose figures.

This is the first energy storage investment for Vision Fund, the $100 billion venture fund set up by SoftBank founder Masayoshi Son. While large by startup standards, it’s in keeping with the capital costs that Energy Vault will face in scaling up its technology to meet its commitments. Those include a 35 megawatt-hour order with Tata Power Company, the energy-producing arm of the Indian industrial conglomerate, first unveiled in November, as well as plans to demonstrate its first storage tower in northern Italy in 2019.

For Vision Fund, it’s also an unusual choice for a storage investment, given that the vast majority of venture capital in the industry today is being directed toward lithium-ion batteries. Lithium-ion batteries are limited in terms of how many hours they can provide cost-effectively, with about 4 hours being seen as the limit today.

The search for long-duration energy storage has driven investment into flow batteries, compressed-air energy storage and variations on gravity-based storage, including a previous startup backed by Gross and Idealab, Energy Cache, whose idea of using a ski lift carrying buckets of gravel up a hill to store energy petered out with a 50-kilowatt pilot project.