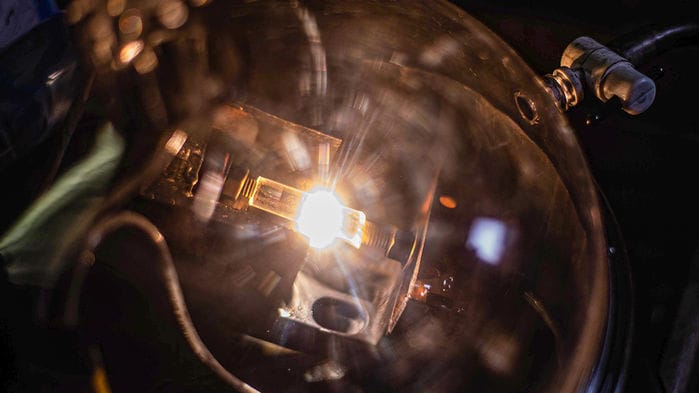 LONDON - Science doesn’t usually take after fairy tales. But Rumpelstiltskin, the magical imp who spun straw into gold, would be impressed with the latest chemical wizardry. Researchers at Rice University report today in Nature that they can zap virtually any source of solid carbon, from food scraps to old car tires, and turn it into graphene—sheets of carbon atoms prized for applications ranging from high-strength plastic to flexible electronics. Current techniques yield tiny quantities of picture-perfect graphene or up to tons of less prized graphene chunks; the new method already produces grams per day of near-pristine graphene in the lab, and researchers are now scaling it up to kilograms per day.

“This work is pioneering from a scientific and practical standpoint” as it promises to make graphene cheap enough to use to strengthen asphalt or paint, says Ray Baughman, a chemist at the University of Texas, Dallas. “I wish I had thought of it.” The researchers have already founded a new startup company, Universal Matter, to commercialize their waste-to-graphene process.

With atom-thin sheets of carbon atoms arranged like chicken wire, graphene is stronger than steel, conducts electricity and heat better than copper, and can serve as an impermeable barrier preventing metals from rusting. But since its 2004 discovery, high-quality graphene—either single sheets or just a few stacked layers—has remained expensive to make and purify on an industrial scale. That’s not a problem for making diminutive devices such as high-speed transistors and efficient light-emitting diodes. But current techniques, which make graphene by depositing it from a vapor, are too costly for many high-volume applications. And higher throughput approaches, such as peeling graphene from chunks of the mineral graphite, produce flecks composed of up to 50 graphene layers that are not ideal for most applications.

Graphene comes in many forms. Single sheets, which are ideal for electronics and optics, can be grown using a method called chemical vapor deposition. But it produces only tiny amounts. For large volumes, companies commonly use a technique called liquid exfoliation. They start with chunks of graphite, which is just myriad stacked graphene layers. Then they use acids and solvents, as well as mechanical grinding, to shear off flakes. This approach typically produces tiny platelets each made up of 20 to 50 layers of graphene.

In 2014, James Tour, a chemist at Rice, and his colleagues found they could make a pure form of graphene—each piece just a few layers thick—by zapping a form of amorphous carbon called carbon black with a laser. Brief pulses heated the carbon to more than 3000 kelvins, snapping the bonds between carbon atoms. As the cloud of carbon cooled, it coalesced into the most stable structure possible, graphene. But the approach still produced only tiny qualities and required a lot of energy.

Two years ago, Luong Xuan Duy, one of Tour’s graduate students, read that other researchers had created metal nanoparticles by zapping a material with electricity, creating the same brief blast of heat behind the success of the laser graphene approach. “I wondered if I could use that to heat a carbon source and produce graphene,” Duy says. So, he put a dash of carbon black in a clear glass vial and zapped it with 400 volts for about 200 milliseconds. Initially he got junk. But after a bit of tweaking, he managed to create a bright yellowish white flash, indicating the temperature inside the vial was reaching about 3000 kelvins. Chemical tests revealed he had produced graphene.

It turned out to be a type of graphene that is ideal for bulk uses. As the carbon atoms condense to form graphene, they don’t have time to stack in a regular pattern, as they do in graphite. The result is a material known as turbostatic graphene, with graphene layers jumbled at all angles atop one another. “That’s a good thing,” Duy says. When added to water or other solvents, turbostatic graphene remains suspended instead of clumping up, allowing each fleck of the material to interact with whatever composite it’s added to.

“This will make it a very good material for applications,” says Monica Craciun, a materials physicist at the University of Exeter. In 2018, she and her colleagues reported that adding graphene to concrete more than doubled its compressive strength. Tour’s team saw much the same result. When they added just 0.05% by weight of their flash-produced graphene to concrete, the compressive strength rose 25%; graphene added to polydimethylsiloxane, a common plastic, boosted its strength by 250%.

Those results could reignite efforts to use graphene in a wide range of composites. Researchers in Italy reported recently that adding graphene to asphalt dramatically reduces its tendency to fracture and more than doubles its life span. Last year, Iterchimica, an Italian company, began to test a 250-meter stretch of road in Milan paved with graphene-spiked asphalt. Tests elsewhere have shown that adding graphene to paint dramatically improves corrosion resistance.

These applications would require high-quality graphene by the ton. Fortunately, the starting point for flash graphene could hardly be cheaper or more abundant: Virtually any organic matter, including coffee grounds, food scraps, old tires, and plastic bottles, can be vaporized to make the material. “We’re turning garbage into graphene,” Duy says.