Electricity and water do mix: How electric ships are clearing the air on the B.C. coast 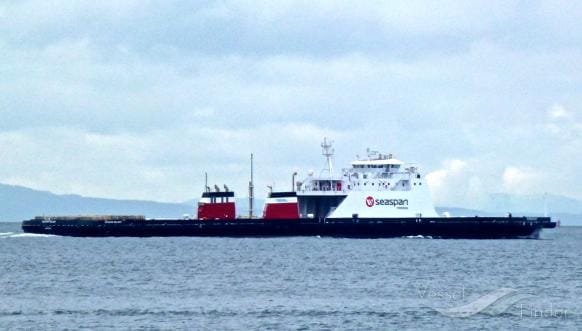 The Seaspan Reliant is one of two natural gas/electric hybrid ships working on the B.C. coast.

TORONTO - The river is running strong and currents are swirling as the 150-metre-long Seaspan Reliant slides gently into place against its steel loading ramp on the shores of B.C.'s silty Fraser River.

The crew hustles to tie up the ship, and then begins offloading dozens of transport trucks that have been brought over from Vancouver Island.

While it looks like many vessels working the B.C. coast, below decks, the ship is very different. The Reliant is a hybrid, partly powered by electricity, the seagoing equivalent of a Toyota Prius.

Down below decks, Sean Puchalski walks past a whirring internal combustion motor that can run on either diesel or natural gas. He opens the door to a gleaming white room full of electrical cables and equipment racks along the walls.

"As with many modes of transportation, we're seeing electrification," said Puchalski, who works with Corvus Energy, a Richmond, B.C. company that builds large battery systems for the marine industry.

In this case, the batteries are recharged by large engines burning natural gas.

"It's definitely the way of the future," said Puchalski.

The 10-year-old company's battery system is now in use on 200 vessels around the world. Business has spiked recently, driven by the need to reduce emissions.

"When you're building a new vessel, you want it to last for, say, 30 years. You don't want to adopt a technology that's on the margins in terms of obsolescence," said Puchalski. "You want to build it to be future-proof."

For years, the shipping industry has been criticized for being slow to clean up its act. Most ships use heavy fuel oil, a cheap, viscous form of petroleum that produces immense exhaust. According to the European Commission, shipping currently pumps out about 940 million tonnes of CO2 each year, nearly three per cent of the global total.

That share is expected to climb even higher as other sectors reduce emissions.

When it comes to electric ships, Scandinavia is leading the world. Several of the region's car and passenger ferries are completely battery powered — recharged at the dock by relatively clean hydro power.

The push for cleaner alternatives is being partly driven by worldwide regulations, with international shipping regulators bringing in tougher emission standards after a decade of talk and study.

At the same time, pressure is building from customers, such as Mountain Equipment Co-op, which closely tracks its environmental footprint. Kevin Lee, who heads MEC's supply chain, said large companies are realizing they are accountable for their contributions to climate change, from the factory to the retail floor.

"You're hearing more companies build it into their DNA in terms of how they do business, and that's cool to see," said Lee. "It's not just MEC anymore trying to do this, there's a lot more partners out there."

In the global race to cut emissions, all kinds of options are on the table for ships, including giant kites being tested to harvest wind power at sea.

Modern versions of sailing ships are also being examined to haul cargo with minimal fuel consumption.

But in practical terms, hybrids and, in the future, pure electrics are likely to play a larger role in keeping the propellers turning along Canada's coast.