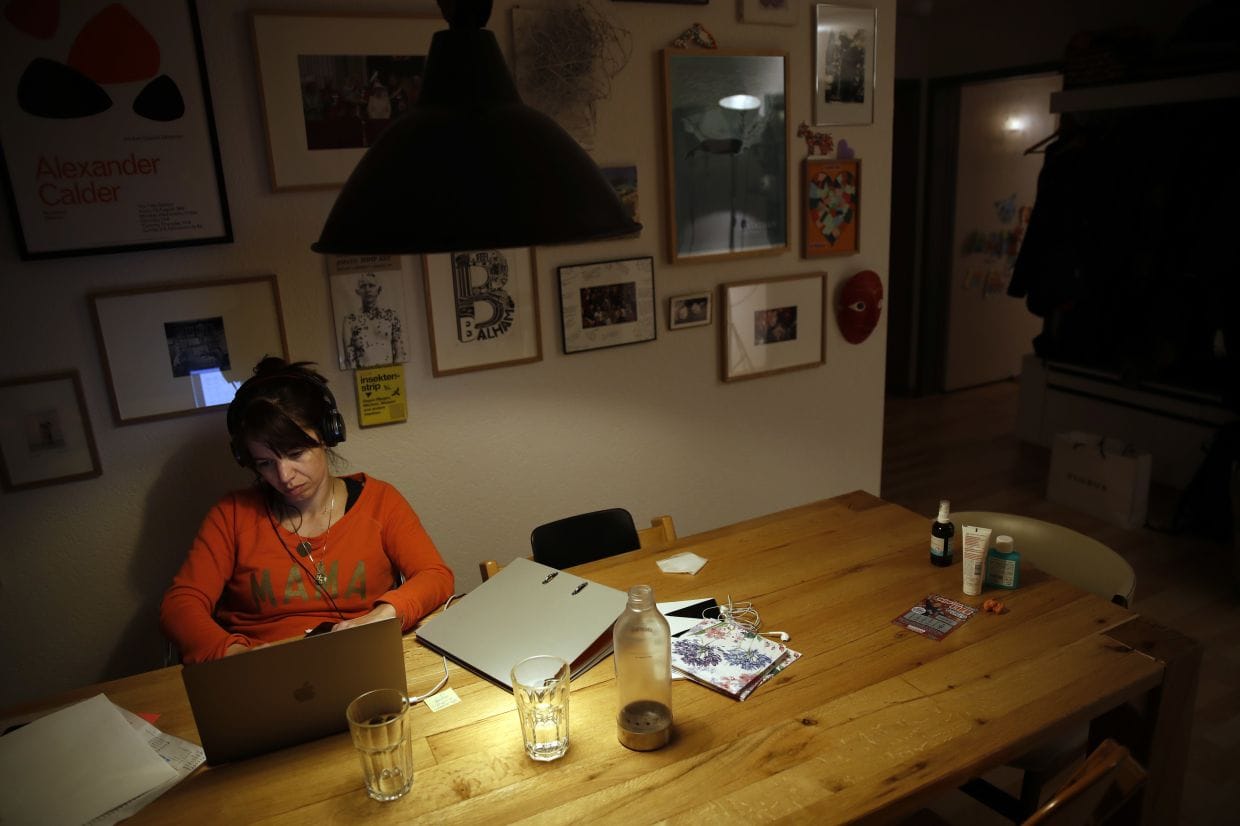 A woman works at a laptop computer at the kitchen in Bern, Switzerland.

LONDON - Life in lockdown means getting up late, staying up till midnight and slacking off in the afternoons.

That’s what power market data show in Europe in the places where restrictions on activity have led to a widespread shift in daily routines of hundreds of millions of people.

It’s a similar story wherever lockdowns bite. In New York, electricity use has fallen as much as 18% from normal times at 8am. Tokyo and three nearby prefectures had a 5% drop in power use during weekdays after Japan declared a state of emergency on April 7, according to Tesla Asia Pacific, an energy forecaster.

Italy’s experience shows the trend most clearly since the curbs started there on March 5, before any other European country. Data from the grid operator Terna SpA gives a taste of what other places are also now starting to report.

With no commute to the office people can sleep longer. Normally, electricity demand began to pick up between 6 a.m. and 8 a.m. Now in Germany, it’s clear coffee machines don’t go on until between 8 a.m. and 9 a.m., said Simon Rathjen, founder of the trading company MFT Energy A/S.

Germany, France and Italy -- which between them make up almost two thirds of the euro-zone economy -- all have furlough measures that allow workers to receive a salary while temporarily suspended from their jobs. The U.K. also has a support package. Many of these workers will be getting up later.

"Now I have quite a relaxed start to the morning,” said David Freeman, an analyst in financial services from London. "I don’t get up until about half an hour before I need to start work.”

There is a deeper dip in electricity use in the afternoons. Previously, power use rose between 2pm and 5pm. Now it dips as people head out for a walk or some air, according to UK grid operator National Grid Plc

It’s "as though we are living through a month of Sundays”, said Iain Staffell, senior lecturer in sustainable energy at Imperial College London.

From 6pm electricity use begins to rise steeply as people finish work and start chores. Restrictions like work and home schooling that prevent much daytime TV watching lifts in the early evening. This following chart for Germany shows the evening peak for power use coming during later hours.

The evening is when electricity use is highest, with most people confined to their homes. Netflix Inc reported a record 15.8 million paid subscribers – almost double the figure forecast by Wall Street analysts. Video-streaming services like Netflix and YouTube have found a captive audience. The new Disney+ service surpassed 50 million subscribers in just five months, a faster pace than predicted.

Internet traffic is skyrocketing, with a surge in bandwidth-intensive applications like streaming services and Zoom. This may mean that monthly broadband consumption of as much as 600 gigabytes, about 35% higher than before, according to Bloomberg Intelligence.

In Singapore, electricity use has dropped off significantly since the country’s "circuit-breaker” efforts to keep people at home began April 7. Electricity use has fallen and stayed low during the day. But late at night is a different story, as power demand fell sharply immediately after the lockdown began, it has steadily crept back in the past two weeks, perhaps a sign that Tiger King and The Last Dance have been finding late-night fans in the city state.

We’re going to bed later too. Demand doesn’t start to drop off until 10pm to 12am, at least an hour later than before.

"My children are definitely going to bed later,” said Liz Stevens, a teaching assistant from London. "Our whole routine is out the window.”

It’s challenging for those that need to predict behaviour – power grids and electricity traders. Forecasting is based on historical data, and there isn’t anything to go into the models gauging use now.

The closest we can get is looking at big events like football World Championships when people are all sitting down at the same time, according to Rathjen at MFT.

What normal looks like when the crisis passes is also an open question. Different countries are set to unravel their measures in their own ways, with Germany and Austria loosening restrictions first and Italy remaining under tight control. Some changes may be permanent, with both workers and employers becoming more comfortable with working from home.

In China, which is further along recovering from the pandemic than Europe or the US, the sharp contraction in overall power output masks a shift in daily routines.

Eating habits have changed. Restaurants are expanding delivery and even offering grocery services as the preference for dining at home persists. Household electricity consumption in China probably increased from activities such as cooking and heating, according to IHS Markit, which said that residential demand rose by 2.4% in the first two months as people stayed in.

The increase in technology use also drove China’s power demand from the telecom and web-service sectors to rise by 27%, the consultancy said.

Overall, power consumption in the first quarter of the year fell 6.5% from the same period in 2019 to 1.57 trillion kilowatt-hours, China’s National Energy Administration said last week. Industry uses about 70% of the country’s electricity, while the commercial sector and households account for 14% each. – Bloomberg