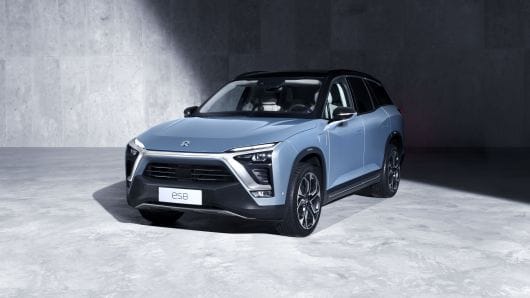 BEIJING - Nio, a Chinese company that makes electric cars, has filed to go public on the New York Stock Exchange. The company said in a filing on Monday that it's looking to raise as much as $1.8 billion in the initial public offering.

The company represents new competition to automakers like Tesla that are adopting electric systems and increasingly seeking to automate certain aspects of driving.

While Nio does have more than 6,200 employees, it just started making deliveries of its first volume manufactured electric vehicle, the seven-seat ES8, in late June, after launching the $67,000 car last year.

Nio expects to make the first deliveries of its second vehicle, the more affordable ES6 sport-utility vehicle, in 2019, and it's looking to bring out a sedan called the ET7 in 2020. "We are generally targeting to launch a new model every year in the near future as we ramp up our business," the company said in Monday's filing.

Nio sees itself as a pioneer in the market for premium electric vehicles in China, and for the moment, it's planning to only sell its cars in that country. The cars provide music streaming through Tencent, and delivery services are available through China's JD.com. Nio has a charging systems for homes, along with services for mobile charging, battery swapping and 24-hour pickup and drop-off.

Nio had a net loss of $502.6 million on less than $7 million in revenue in the first half of 2018, according to the filing. Almost all of the revenue came from vehicle sales. No revenue figures were disclosed for prior periods, but the company did show that in 2017 it had a $758.8 million net loss.

As of July 31, Nio had delivered 481 ES8 vehicles and had "unfulfilled reservations for more than 17,000" more for which people had put down deposits, the filing says.

Nio was founded in 2014, initially under the name Nextev, and the company is based in Shanghai, although more than 500 employees work in its San Jose office. Investors include Baidu, Lenovo and Sequoia Capital.

Nio's chief development officer Padmasree Warrior is on the boards of directors of Microsoft and Spotify. The company's CEO, Bin Li, is chairman of Bitauto Holdings Limited, a company that provides services for the auto industry in China.

The company recognizes that issues could arise as it proceeds with self-driving technology. Its Pilot technology, which includes automatic emergency breaking and other features, is available inside the ES8 vehicle, and Nio is one of 55 companies with permission to test autonomous vehicles on California public roads.

"In March 2018, Tesla indicated that its autopilot system was engaged at the time of a fatal accident and an Uber Technologies Inc. self-driving vehicle struck a pedestrian leading to a fatality," Nio said in the filing. " To the extent accidents associated with our autonomous driving systems occur, we could be subject to liability, government scrutiny and further regulation."

Nio also called out as a risk factor its reliance on manufacturing partners, such as Jianghuai Automobile Group Co., or JAC. Additionally, changes to government policies that help the sales of electric and Chinese-made cars could also cause problems, as could the U.S.-China trade war, the company said.

The lead joint bookrunners in the deal are Morgan Stanley, Goldman Sachs and J.P. Morgan.