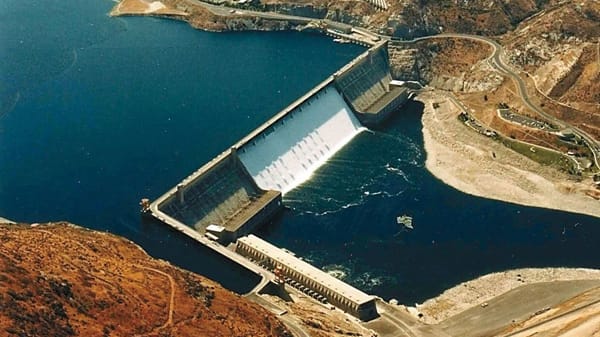 The Grand Coulee Dam sits on the Columbia River in Washington state. How much will customers pay for its power if Trump gets his way? (MCT)

LOS ANGELES - President Trump's 2018 budget proposal is so chock-full of noxious elements — replacing food stamps with "food boxes," drastically cutting Medicaid and Medicare, for a start — that it's unsurprising that one of its most misguided pieces has slipped under the radar.

That's the proposal to privatize the government-owned Bonneville Power Administration, which owns about three-quarters of the high-voltage electric transmission lines in a region that includes California, Washington state and Oregon, serving more than 13.5 million customers. By one authoritative estimate, any such sale would drive up the cost of transmission by 26%-44%.

The $5.2-billon price cited by the Trump administration, moreover, is nearly 20% below the actual value of the Bonneville grid — meaning that a private buyer would pocket an immediate windfall of $1.2 billion, at the expense of federal taxpayers and Bonneville customers.

Trump's plan for Portland, Ore.-based Bonneville is part of a larger proposal to sell off other government-owned electricity bodies, including the Colorado-based Western Area Power Administration and the Oklahoma-based Southwestern Power Administration. But Bonneville is by far the largest of the three, accounting for nearly 90% of the total $5.8 billion the budget anticipates collecting from the sales. The proposal is also part of the administration's

Both plans are said to be politically dead-on-arrival in Washington. But they offer a window into the thinking in the Trump White House.

"The word 'muddle' comes to mind," says Robert McCullough, a respected Portland energy consultant, referring to the justification for the privatization sale included in the Trump budget.

The White House suggests that selling the Bonneville grid would result in lower costs. But that narrative, McCullough wrote in a blistering assessment of the proposal, "displays a severe lack of understanding about the process of setting transmission rates."

McCullough's assessment is an update of a similar analysis he performed when the privatization scheme was first raised by the Trump administration last year. In that analysis issued in June, McCullough said the proposal "raises the question of why these valuable assets would be sold at a discount — and who would get the benefit of the discounted price."

The implications of a sale could be dire for Californians. Bonneville is the majority owner of the California-Oregon Intertie, an electrical transmission system that carries power, including Columbia River-generated hydropower, south to California in the summer and excess California generation to the Pacific Northwest in the winter.

But the idea has drawn fire throughout the region. When it was first broached last year, the Public Power Council, an association of utilities in the Northwest, assailed it as an apparent "transfer of value from the people of the Northwest to the U.S. Treasury."

The region's political leaders had especially harsh words for the idea this time around. "Oregonians raised hell last year when Trump tried to raise power bills for Pacific Northwesterners by selling off Bonneville Power, and yet his administration is back at it again," Sen. Ron Wyden (D-Ore.) said after the idea reappeared. "Our investment shouldn't be put up for sale to free up money for runaway military spending or tax cuts for billionaires." Sen. Maria Cantwell (D-Wash.) promised in a statement to work to "stop this bad idea in its tracks."

The notion of privatizing Bonneville predates the Trump administration; it was raised by Bill Clinton and again by George W. Bush, who thought the public would gain if the administration could sell its power at market rates. Both initiatives failed.

The same free-enterprise ideology underlies the Trump proposal. Privatizing the transmission lines "encourages a more efficient allocation of economic resources and mitigates unnecessary risk to taxpayers," the budget asserts. "Ownership of transmission assets is best carried out by the private sector where there are appropriate market and regulatory incentives."

But that's based on a misunderstanding of how transmission rates are set, McCullough says. Transmission is essentially a monopoly enterprise, with rates overseen by the Federal Energy Regulatory Commission based on the grid's costs. There's very little in the way of market "incentives" involved in transmission, since no one has come forward to build a competing grid.

Then there's the profit motive. Bonneville "currently sells and delivers its power at cost," McCullough wrote last year. "Under a private regime, an investor-owned utility would likely charge a higher rate of return."

None of these considerations appears to have been factored into the White House budget proposal. "Either there's an unsophisticated person at the Office of Management and Budget thinking up these numbers himself," McCullough told me, "or there would seem to be ongoing negotiations with an unidentified third party." No such buyer has emerged in the past, however.

What's left is a blind faith in the magic of the market, compounded by ignorance about how the transmission market operates. Put it together, and there's reason to wonder if Trump is even serious about this plan.