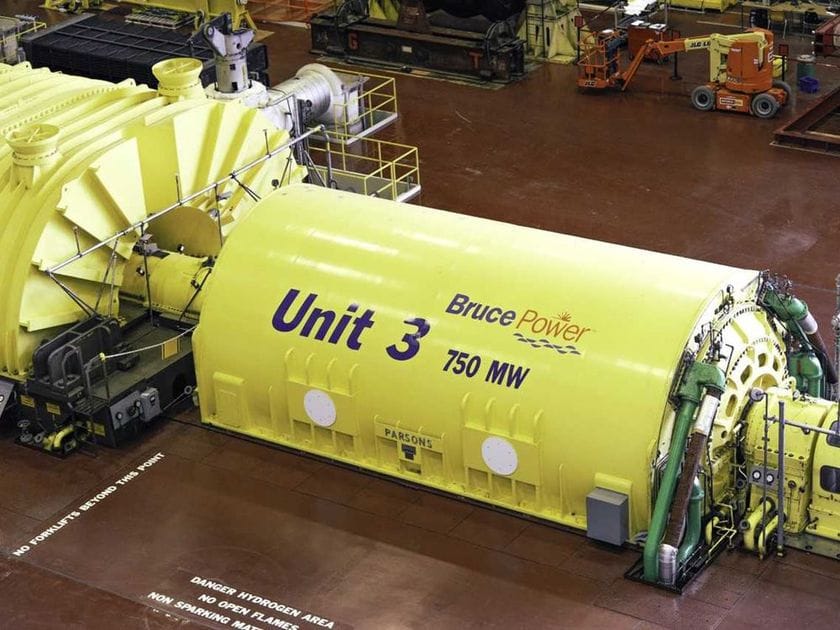 OWEN SOUND - Bruce Power’s Unit 3 nuclear reactor will squeeze out an extra 22 megawatts of electricity, thanks to upgrades during its recent planned outage.

Similar gains are anticipated at its three sister reactors at Bruce A generating station, which presents the opportunity for the biggest gains, due to a design difference over Bruce B’s four reactors, Bruce Power spokesman John Peevers said.

Bruce A reactor efficiency gains stem mainly from the fact Bruce A’s non-nuclear side, including turbines and the generator, was sized at 88 per cent of the nuclear capacity, Peevers said.

This allowed 12 per cent of the energy, in the form of steam, to be used for heavy water production, which was discontinued at the plant years ago. Heavy water, or deuterium, is used to moderate the reactors.

That design difference left a potential excess capacity that Bruce Power is making use of through various non-nuclear enhancements. But the nuclear operator will be looking at enhancements at Bruce B as well, Peevers said.

Bruce Power’s efficiency gain came from “technology advancements,” including a “generator-stator improvement project that was integral to the uprate,” a Bruce Power news release said July 11.

Peevers said the stationary coils and the associated iron cores inside the generator are referred to as the stator. The stator acts as a conductor for the main generator current, while the turbine provides the mechanical torque on the shaft of the generator.

“Some of the other things we’re working on are transformer replacement and cooling pump enhancements which also help efficiency and contribute to greater megawatt output,” Peevers said.