Advocates call for change after $2.9 million surplus revealed for BC Hydro fund 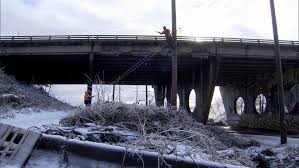 VANCOUVER - BC Hydro is sitting on a surplus of about $2.9 million in its customer crisis fund, leading to calls for the utility to reduce its take from the average customer or provide more money to those in need.

B.C. Liberal Energy Critic Greg Kyllo said if the imbalance continues in the year-old pilot program, it’s time to cut the monthly 25 cent fee in half.

"If the grant requirement or the need in the province is going to remain where it is, they should look at rolling back the contribution level in the fund," he told CTV News Vancouver from Salmon Arm.

But social agencies who were part of the consultation around the fund in the beginning said it’s more likely that people in need don’t know about the fund and more time is necessary to get the word out.

"If they collect the money, then the program’s got to change to make sure more people are able to be helped," said Gudrun Langolf of the Council of Senior Citizens Organizations of BC.

The customer crisis fund was started in spring 2018 to give people short-term relief when they can’t pay their electricity bills. Customers can apply to get a grant of up to $500 to keep the lights on, and up to $600 if electricity heats their homes.

The public utility took in about 25 cents per customer per month which added up to a revenue of $4.5 million in the year since the program started, BC Hydro confirmed to CTV News.

The news will come as a welcome relief to those who suddenly struggle to pay their hydro bills.

Some people who come into Disability Alliance B.C. are often anxious and emotional when they’re suddenly unable to pay their bills, said Shar Saremi, an advocate there.

"I’ve had people crying. I’ve had people who have experienced a loss in the family," she said. "A lot of the time people are stressed out, anxious, really upset. They are looking for assistance, and they aren’t sure what is available for them."

She said people are only eligible if their bills are under $1,000, which could be cutting out the people who are most in need. And because the program is in its first year, it could be undersubscribed, she said.

"A lot of people don’t know about the program, don’t know how to apply, or what kind of assistance is out there," Saremi said.

The fund was established thanks to an order from the B.C. Utilities Commission, the utilities regulator in the province.

The pilot program is going to be examined by the regulator at the end of its first year.

"Any remaining balance in the account at the end of the pilot would be returned to residential ratepayers," says a BCUC fact sheet. The decision on exactly what to do with the money hasn’t yet been made.

In Ontario, private utilities are expected to raise 0.12 per cent of their revenue. Across the province, those utilities gave out about $7.3 million in grants. Any unused funds in one year are rolled over to the following year.