LNG powered with electricity could be boon for B.C.'s independent power producers 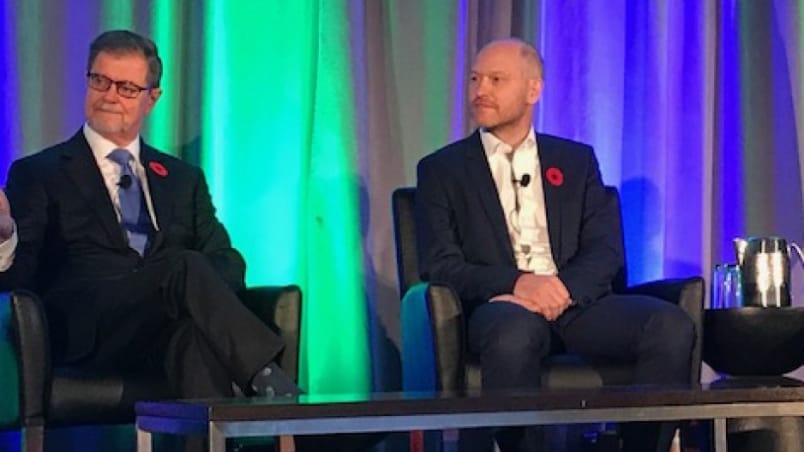 David Keane, president of Woodfibre LNG, left, and Sven Demmig of Siemens talk about the opportunities for B.C. power producers

VANCOUVER - B.C. has abundant clean power – if only there was a way to ship those electrons across the sea to help coal-dependent countries reduce their emissions.

Natural gas that is liquefied using clean hydro and wind power and then exported would be, in a sense, a way of embedding B.C.’s low emission electricity in another form of energy.

Given the increased demand that could come from an LNG industry – especially one that moves towards greater electrification – poses some potentially big opportunities for B.C.’s clean energy independent power sector, as those attending the Clean Energy Association of BC's annual at the Generate conference heard recently.

At a session on LNG electrification, delegates were told that LNG produced in B.C. with electricity could have some significant environmental benefits.

Given how much power an LNG plant that uses electric drive consumes, an electrified LNG industry could also pose some significant opportunities for independent power producers – a sector that had the wind taken out of its sails with the sanctioning of Site C dam.

Only one LNG plant being built in B.C. – Woodfibre LNG – will use electric drive to produce LNG, although the companies behind Kitimat LNG have changed their original design plans, and now plan to use electric drive drive as well.

Even small LNG plants that use electric drive require a lot of power.

“We’re talking about a lot of power, since it’s one of the biggest consumers you can connect to a grid,” said Sven Demmig, head of project development for Siemens.

Most LNG plants still burn natural gas to drive the liquefaction process. They typically generate 0.35 tonnes of CO2e per tonne of LNG produced.

Because it will use electric drive, LNG produced by Woodfibre LNG will have an emissions intensity that is 80% less than LNG produced in the Gulf of Mexico, said Woodfibre president David Keane.

In B.C., the benchmark for GHG intensities for LNG plants has been set at 0.16 tonnes of CO2e per tonne of LNG. Above that, LNG producers would need to pay higher carbon taxes than those that are below the benchmark.

The LNG Canada plant has an intensity of 0.15 tonnes og CO2e per tonne of LNG. Woodfibre LNG will have an emissions intensity of just 0.059, thanks to electric drive.

“So we will be significantly less than any operating facility in the world,” Keane said.

Keane said Sinopec has recently estimated that it expects China’s demand for natural gas to grow by 82% by 2030.

“So China will, in fact, get its gas supply,” Keane said. “The question is: where will that supply come from?

“For every tonne of LNG that’s being produced today in the United States -- and tonne of LNG that we’re not producing in Canada -- we’re seeing about 10 million tonnes of carbon leakage every single year.”

The first Canadian company to produce LNG that ended up in China is FortisBC. Small independent operators have been buying LNG from FortisBC’s Tilbury Island plant and shipping to China in ISO containers on container ships.

David Bennett, director of communications for FortisBC, said those shipments are traced to industries in China that are, indeed, using LNG instead of coal power now.

“We know where those shipping containers are going,” he said. “They’re actually going to displace coal in factories in China.”

Verifying what the LNG is used for is important, if Canadian producers want to claim any kind of climate credit. LNG shipped to Japan or South Korea to displace nuclear power, for example, would actually result in a net increase in GHGs. But used to displace coal, the emissions reductions can be significant, since natural gas produces about half the CO2 that coal does.

The problem for LNG producers here is B.C.’s emissions reduction targets. Even LNG produced with electricity will produce some GHGs. The fact that LNG that could dramatically reduce GHGs in other countries, if it displaces coal power, does not count in B.C.’s carbon accounting.

Under the Paris Agreement, countries agree to set their own reduction targets, but don’t typically get to claim any reductions that might result outside their own country.

Canada is exploring the use of Internationally Transferred Mitigation Outcomes (ITMO) under the Under the Paris Agreement to allow Canada to claim some of the GHG reductions that result in other countries, like China, through the export of Canadian LNG.

“So if they’re buying 4 million tonnes of emissions from us, under these ITMOs, then they have net reduction of 56 million tonnes, we’d have a net increase of zero.”

But even if China and Canada agreed to such a trading arrangement, the United Nations still hasn’t decided just how the rules around ITMOs will work.