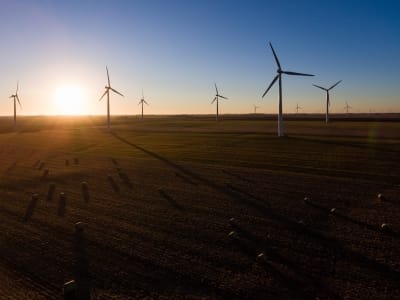 WASHINGTON - Power company MidAmerican Energy recently announced that it has opened two huge wind farms in the US state of Iowa.

The two projects, called Beaver Creek and Prairie, total 169 turbines and have a combined capacity of 338 megawatts (MW), enough to meet the annual electricity needs of 140,000 homes in the state.

“We’re committed to providing reliable service and outstanding value to our customers, and wind energy accomplishes both,” said Mike Fehr, vice president of resource development at MidAmerican. “Wind energy is good for our customers, and it’s an abundant, renewable resource that also energizes the economy.”

The wind farms form part of MidAmerican Energy’s major Wind XI project, which will see an extra 2,000MW of wind power built, and $3.6 billion invested, by the end of 2019. The company estimates it is the largest economic development project in Iowa’s history.

Iowa is something of a hidden powerhouse in American wind energy. The technology provides an astonishing 36.6 percent of the state’s entire electricity generation, according to the American Wind Energy Association (AWEA). It also has the second largest amount of installed capacity in the nation at 6917MW; Texas is first with over 21,000MW.

Along with capital investment, wind power brings significant job opportunities and tax revenues for the state. An estimated 9,000 jobs are supported by the industry, something a recent report stated could grow to over 15,000 within a couple of years.

MidAmerican Energy is also keen to stress the economic benefits of its new giant projects, claiming that they will bring in $62.4 million of property tax revenue over their 20-year lifetime.

Tom Kiernan, AWEA’s CEO, revealed last year that wind energy is providing more than five states in the American Midwest with over 20 percent of electricity generation, “a testament to American leadership and innovation”.

“For these states, and across America, wind is welcome because it means jobs, investment, and a better tomorrow for rural communities”, he added.