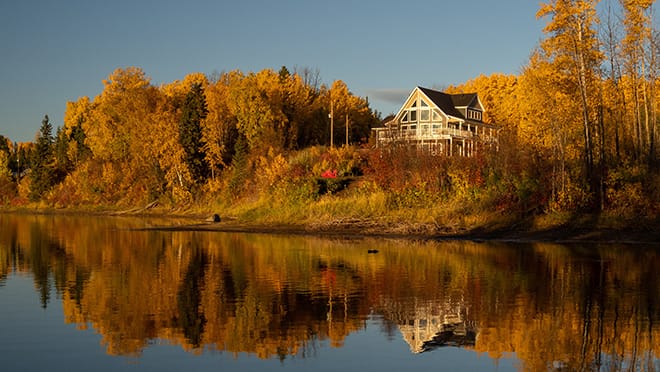 VANCOUVER - Heat pump provides heating, cooling in northern B.C. home
It's a tradition at Vanderhoof-based Northern Homecraft that, on the day of the blower door test for a just-completed home, everyone who worked on the build gathers to watch it happen. And in the spring of 2021, on a dazzling piece of land overlooking the mouth of the Stuart River near Fort St. James, that day was a cause for celebration.

A new 3,400-square foot home subjected to the blower door test – a diagnostic tool to determine how much air is entering or escaping from a home – was rated as having just .8 air changes per hour (ACH). That helps make it a Net Zero Ready home, and BC Energy Code Step 5 compliant. That means it would take about a third of the amount of energy to heat the home compared to a typical similar-sized home in B.C. today.

From an energy-efficiency perspective, this is a home whose evident beauty is anything but skin deep.

"The home has lot of square footage of finished living space, and it also has a lot of glazing," says Northern Homecraft owner Shay Bulmer, referring to the home's large windows. "We had a lot of window space to deal with, as well as large vaulted open areas where you can only achieve so much additional insulation. There were a few things that the home had going against it as far as performance goes. There were challenges in keeping it comfortable year-round."

Well-insulated home ideal for heat pump option
Most homes in colder areas of B.C. lean on gas-fueled heating systems to deal with the often long, chilly winters. But with the arrival of cold climate heat pumps capable of providing heat efficiently when temperatures dip as low as -30°C, there's now a clean option for those homes.

Heat pumps are an increasingly popular option, both for new and existing homes, because they avoid carbon emissions associated with fossil use while also offering summer cooling.

The Fort St. James home, which was built with premium insulation, airtightness and energy efficiency in mind, made the decision to opt for a heat pump even easier. Still, the heat pump option took the home's owners Dexter and Cheryl Hodder by surprise. While their focus was on designing a home that took full advantage of views down to the river, the couple was under the distinct impression that heat pumps couldn't cut it in the chilly north.

"I wasn't really considering a heat pump, which I thought was only a good solution in a moderate climate," says Dexter, who as director of research and education for the John Prince Research Forest, studies wildlife and forestry interactions in north central B.C. "The specs on the heat pump indicate it would work down to -28°C, and I was skeptical of that. But it worked exactly to spec. It almost seems ridiculous to generate heat from outside air at those low temperatures, but it does."

Getting it right with support and rebates
Northern Homecraft took advantage of BC Hydro's Mechanical System Design Pilot program to ensure proper heat pump system design, installation, and verification for the home were applied.

The combination of the year-round benefits of heat pumps, their role in reducing fossil fuel emissions, and the availability of rebates, is making the systems increasingly attractive in B.C. According to CleanBC, most heat pumps produce 97% less greenhouse gas emissions than a high-efficiency natural gas furnace, and BC Hydro offers a heat pump incentives guide that includes available rebates and emissions savings for switching to a heat pump in your home.

BC Hydro offers home renovation rebates of up to $10,000 for energy-efficient upgrades to existing homes. Rebates are available for windows and doors, insulation, heat pumps, and heat pump hot water heaters. In partnership with CleanBC, rebates of up to $11,000 are also available – when combined with the federal Greener Homes program – for those switching from fossil fuel heating to an electric heat pump.

'Heat dome' pushes summer highs to 40°C
Cooling wasn't really a consideration for Dexter and Cheryl when they were living in a smaller bungalow shaded by trees. But they knew that with the big windows, vaulted ceiling in the living room, and an upstairs bedroom in the new home, there may come a time when they needed air conditioning.

That day arrived shortly after the home was built, as the infamous "heat dome" settled on B.C. and drove temperatures at Fort St. James to a dizzying 40°C.

"It was disgustingly hot, and I don't care if I never see that again here," says Hodder, with a laugh. "But the heat pump maintained the house really nicely throughout, at about 22 degrees. The whole house stayed cool. We just had to close the door to the upper bedroom so it wasn't really heating up during the day."

Hodder says he had to work with the heat pump manufacturer Mitsubishi a couple times over that first year to fix a few issues with the system's controls. But he's confident that the building's tight and well-insulated envelope, and the heat pump's backup electric heat that kicks in when temperatures dip below -28°C, will make it the system-for-all-seasons it was designed to be.

Even with the use of supplemental electric heating during the record chill of December-January, the home's energy costs weren't much higher than the mid-winter energy bills they used to pay in the couple's smaller bungalow that relied on a combination of gas-fired in-floor heating and electric baseboards.

Fort St. James is a former fur trading post located northwest of Prince George and a short drive north of Vanderhoof. Winters are cold and snowy, with average daily low temperatures in December and January of around -14°C.

"During the summer and into the fall, we were paying well less than $100 a month," says Hodder, looking back at electricity bills over the first year in the home. "And that's everything. We're only electric here, and we also had both of us working from home all last year."

Word of mouth making heat pumps popular in Fort St. James
While the size of the home presented new challenges for the builders, it's one of five Net Zero Ready or Net Zero homes – all equipped with some form of heat pump – that Northern Homecraft has built in Fort St. James.

The smallest of the homes is a two-bedroom, one-bathroom home that's just under 900 square feet. Northern Homecraft may be based in Vanderhoof, but it's the much smaller town of Fort St. James where they're making their mark with super-efficient homes. Net Zero Ready homes are up to 80% more efficient than the standard building code, and become Net Zero once renewable energy generation – usually in the form of photovoltaic solar – is installed.

"We were pretty proud that the first home we built in Fort St. James was the first single family Net Zero Ready home built in B.C.," says Northern Homecraft's Bulmer. "And I think it's kind of caught on in a smaller community where everyone talks to everyone."