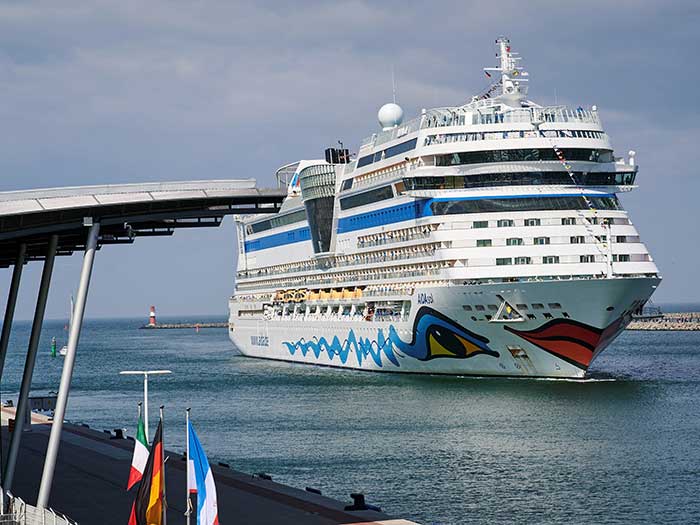 The power plant has been established under a joint agreement between AIDA Cruises, a unit of Carnival Corporation & plc (NYSE/LSE: CCL; NYSE: CUK), the state government of Mecklenburg-Western Pomerania, the city of Rostock and the Port of Rostock.

“With our green cruising strategy, we have been investing in a sustainable cruise market for many years,” said AIDA Cruises President Felix Eichhorn. “The shore power plant in Rostock-Warnemünde is another important step — after the facility in Hamburg — on our way to an emission-neutral cruise that we want to achieve with our fleet. I would like to thank the state government of Mecklenburg-Western Pomerania and all partners involved for the good and trusting cooperation. Together, we are sending out an important signal, not just in Germany, but throughout Europe.”

CAN POWER TWO CRUISE SHIPS AT A TIME
The shore power plant, which was completed in summer 2020, is currently the largest in Europe. With an output of up to 20 megavolt amperes (MVA), two cruise ships can be supplied with electricity at the same time at berths P7 and P8 in Warnemünde.

In regular passenger operation AIDAsol needs up to 4.5 megawatts per hour (MWh) of electricity.

The use of shore power to supply ships with energy is a decisive step in AIDA Cruises’ plans to reduce local emissions to zero during berthing over time, as a cruise ship typically stays in port around 40% of its operating time.

As early as 2004, when the order for the construction of AIDAdiva was placed, and for all other ships put into service in subsequent years, the company has considered the use of shore power as an option for environmentally friendly ship operation.

Since 2017, AIDA Cruises has been using Europe’s first shore power plant in Hamburg-Altona, where AIDAsol is in regular operation. Currently, 10 ships in the AIDA fleet can either use shore power where available or are technically prepared for it.

The aim is to convert all ships built from 2000 onwards.

With AIDA Cruises starting a cruise season from Kiel, Germany, on May 22, AIDAsol will also be the first cruise ship to complete the final tests on a newly built shore power plant there. Construction of that plant is the result of a joint initiative by the state government of Schleswig-Holstein, the city and the port of Kiel and AIDA Cruises. AIDAsol is scheduled to arrive in Kiel on the afternoon of May 13.

As part of its green cruising strategy, AIDA Cruises has been investing in a sustainable cruise operation for many years. Other steps on the path to the zero emission ship of the future are already in preparation. This year, AIDAnova will receive the first fuel cell to be used on an ocean-going cruise ship. In 2022, the largest battery storage system to date in cruise shipping will go into operation on board an AIDA ship. In addition, the company is already addressing the question of how renewable fuels can be used on board cruise ships in the future.