US Moving Towards 30% Electricity From Wind & Solar 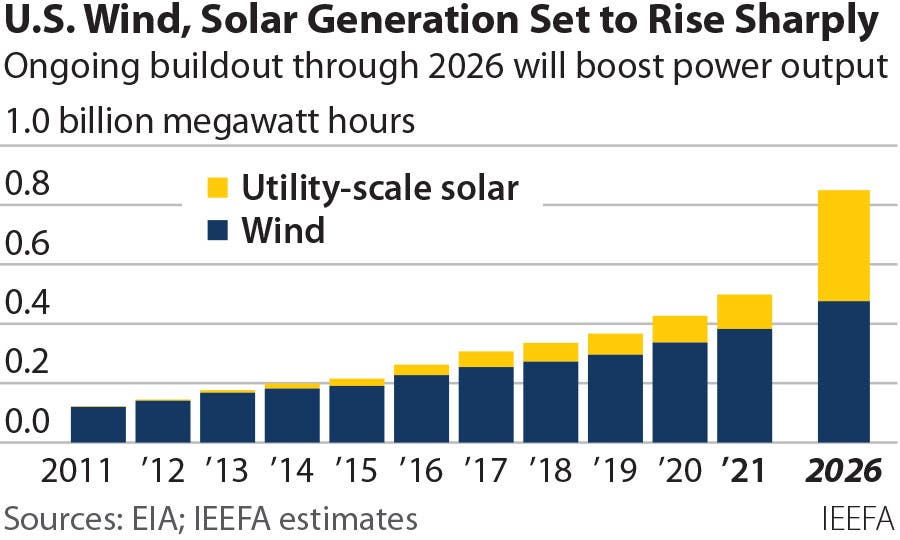 “The Solar Energy Industries Association now expects utility-scale installations to average more than 21,000MW a year through 2026, with a peak of 25,000MW in 2023,” IEEFA writes. “Continued growth is also expected in U.S. wind generation, with 37.7GW of new capacity already under construction or in advanced development, which would be added to 127.8GW in existing installed capacity.”

Meanwhile, with wind and solar growth booming, fossil fuels are declining. “Coal and natural gas are now locked into an essentially zero-sum game where increases in one fuel’s generation comes at the expense of the other. Together, they are not gaining market share, rather they are trading it back and forth, and the rapid growth in renewable generation will cut even deeper into the market share of both.”

And what of rooftop solar? Some states in Australia now have periods where the entire state grid is powered just by solar on the roofs of private citizens. As this revolution progresses in the USA, what impact will it make on fossil fuel generators — which are expensive to build, expensive to maintain, expensive to fuel, and rely on an expensive distribution network.

“EIA estimates that this ‘small-scale solar’ produced 41.7 million MWh of power in 2020, a 19 percent increase from 2019. This growth will likely continue in the years ahead as costs continue to fall and concerns about grid reliability rise. Assuming a conservative 15 percent annual increase in small-scale solar going forward would push the sector’s generation to almost 100 million MWh in 2026.”

The Joker in the story might be the impact from electric vehicle adoption. Sales are set to surge and there’s more and more interest in V2G technology.