UPS Ratings — Not So Apparent 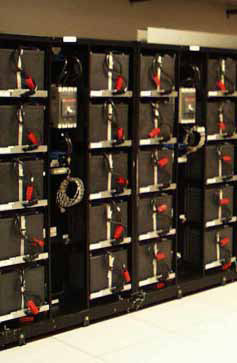 The uninterruptible power supply (UPS) industry is very competitive. Products are often selected based on the cost per volt-ampere (VA) of output power.

This approach works well when vendors have tested their UPS system with common computers so that the user can select from a table that shows model and backup time. This approach does not work well when choosing a UPS system for demanding applications that involve cyclical loads such as starting electric induction motors. These motors are often used in air conditioners, conveyor belts and for gate control.

Applications that require extended backup time also places additional demands on a UPS system. It is a little bit like automobile brakes. The average driver is happy as long as the car stops. Brakes basically convert kinetic energy to heat. The average car buyer does not care about rotor and caliper size and has never experienced brake fade. If the car is taken to the track and driven hard, it won’t take long before the brakes fail from overheating. Few cars are designed with brakes that can take such abuse. It really doesn’t matter to most people, so most cars have small brakes that are not up to rigorous performance standards. UPS cases are opposite because these systems are called upon to start motors, but comparable, due to high currents and the heat that is generated.

Power Factor (also known as displacement power factor) is the cosine of the phase angle φ between the current and voltage sinusoidal waveforms. The power in a circuit that is transformed from electric to non-electric energy is called real power. The portion of power that is the result of stored energy, and which returns to the source over a full line cycle, is known as reactive power. Apparent Power Factor (also known as distortion power factor) is real power in watts (W) divided by the product of Vrms x Irms and is typical of the current drawn by a switchmode power supply that is not power factor corrected. The typical apparent power factor for such a power supply is 0.6 to 0.7. Apparent power factor is neither leading nor lagging, as there is no phase angle to speak of.

The UPS industry rates most products in VA which does not include the effects of harmonic current). A hypothetical UPS model might be called XX-1000 leading the prospective customer to assume that the UPS system could provide 1kVA of apparent power to a critical load. Studying the specifications reveals that the unit is capable of providing only 0.7kW of real power. The typical specification does not state power factor or maximum continuous current, nor does it allow for harmonic distortion. Not knowing load power factor or maximum current the user will not know for sure if the unit can operate at 1kVA. We will here argue for a more sensible industry specification for the discerning customer.

Since the UPS system is only rated for 0.7kW, it would overheat fairly quickly as its inverter and inverter transformer are not rated to handle more than 0.7kW. This would not be a problem if the UPS system is designed with internal batteries to provide backup power for 10 to 20 minutes. It becomes a major problem if the customer connects and external battery bank to increase the backup time to several hours. This is often the case with special applications such as security and wireless systems. Why does the UPS industry use the obviously misleading VA specification (sometimes called computer VA). This practice originated in the 80s, as a now defunct company attempted to gain competitive advantage. It didn’t take long for the rest of the industry to follow.

10kVA heater is a resistive load with a power factor of 1. Real power is 1kVA x 1 = 1kW and no reactive current is returned to the inverter, so the UPS system is unable to supply the load as it exceeds its rating by 0.3kW

1kVA electric motor is a resistive/inductive load with a power factor of 0.8. Real power is 1kVA x 0.8 = 0.8kW with 0.6kVAR reactive power returned to the inverter, so the UPS system is unable to carry the load.

1kVA computer is a rectifier/capacitor, non-linear load with a power factor of 0.7. Real power is 1kVA x 0.7 = 0.7kW with a 7.14kVAR of harmonic distortion current returned to the inverter. The above three cases clearly demonstrate the inadequacy of the VA-rating system. It is obvious that all of the above three cases would require a 1kW UPS system. This leads to the inescapable conclusion that it would be much better to rate UPS products in watts (W) instead of volt-ampere (VA).