Question: Why the VFD operated Motor produces more Torque than across the line?

Answer: Starting an ac motor across the line causes a high current (locked rotor current) to flow due to the difference between the stator rotating field and the rotor rotating field.  At the initial start point the two frequencies have a 100% difference which requires the lock rotor current to flow (left chart).  As the rotor speed increases, the difference in the two frequencies is reduced and the current starts to slowly decrease.  The current does not decrease to the full load value until the rotor speed approached the rated speed of the motor.  Starting the motor and varying the frequency on a VFD has the stator speed (frequency) start at the rated slip frequency of the motor (2-3 Hz) where the rotor can produce full rated constant torque with full load current flowing (right chart). As the VFD frequency increases, the motor voltage proportionally increases to maintain the rated motor flux at all speeds from zero to rated speed.

The VFD at any full speed between zero and rated speed can produce 100%, 125% or even 200% rated torque with 100%, 125% and 200% rated current respectively.  The magnitude of current and torque being the same percent value holds true from no load to approximately 80% of the motors breakdown torque (straight line for current and torque).  Once you try to obtain more than 80% breakdown torque, the current required increases very rapidly.

Question: What is the weakest link in VFD components? How can better specifications mitigate this weak link?

Answer: The weakest component link in the frequency drive VFD is the DC Bus capacitors.  They can be rated for 950 to 1100 VDC.  VFDs with ratings less than 1000 VDC will generally have a significantly shorter mean time between failure ratings.  The specification for 575 volt VFDs should be written in either of the two following ways:

Question: What are the key considerations for single to three phase conversion using VFDs?

Answer: The three phase input rated VFD when used on a single phase power supply must be oversized. The single phase line current is 1.732 times higher than the motors’ three phase current rating which is well above the safe operating current rating of the VFD input rectifier.  The VFD therefore is generally sized to twice the motors’ FLA rating.  The DC Bus Voltage only produces an average of 125% of the single phase line current instead of 135% for three phase input voltages.  This reduction in voltage will cause the motor to draw slightly higher motor current to supply the rated HP load.

A 10HP, 25.5 ampere three phase motor at 230VAC is required to operate on a single phase 208 Volt supply.  Selecting a VFD with a continuous output current rating of at least 51 amperes will provide sufficient oversizing of the rectifier and the DC Bus capacitors to allow for the motor to produce full load motor current.  The 208 volt incoming line supply will only allow the VFD to produce 193 volts of three phase voltages. The motor is designed to operate at voltages up to +/- 10% of the rated motor voltage (207 to 253Volts).  Since the 193 volt output is below the -10% rating, a single phase step up isolation or auto transformer will be required. By using a 208 volt to 240 Volt single phase transformer, the VFD will be able to produce a motor voltage of 223 volts which is with the +/- 10% capability.

Question: What is the typical harmonic spectrum from VFDs?

Answer: VFDs are considered a nonlinear load which will draw a current waveform that does not match the sinewave voltage waveform pattern.  The harmonic spectrum contains a series of frequencies of odd multiples of the fundamental frequency.  The frequencies are multiples of +/- 1 of the number of rectifier devices used. 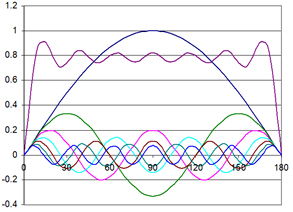 The above odd harmonics with the inverse for their magnitude being added will make a pure square sine wave if we add all the odd harmonics together.   A mathematician name Fourier developed a relationship between a non-sinusoidal signal and a series of pure sinewave of different magnitudes to represent the distorted waveform.  This is known as the Fourier transformation 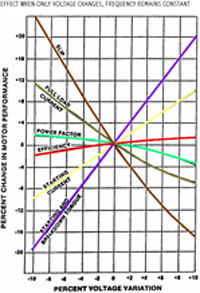 Question: Why does the VFD seem to behave differently when it is operated on the standby generator?

Answer: Standby Engine–generator sets have a relatively high impedance and poor frequency regulation in comparison to the utility power.  The VFD can have extremely fast response times to step changes in motor torque.  The fast response of the VFD with the slow response of the generator could create the generator to became unstable and create a series of over voltage and under voltage surges. When the load on the VFD slows down, the rectifier become reverse biased and the input current drops off to zero immediately.  Upon return of the load, the input current increases back to normal.  These regular step changes in current cause the generator regulator to cause significant oscillations in the generated voltage.   Extending the acceleration and deceleration time may improve the VFD and generator issues.

Read our other VFD Articles: