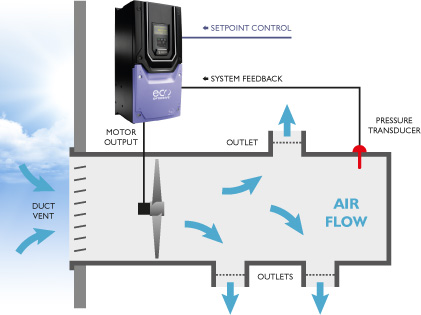 All buildings pose the same problem: how to heat or cool the air inside to create a more comfortable environment for the occupants. In small buildings such as a house, this task is easily handled with air conditioners and heaters. Larger buildings such as offices, hotels, or factories pose a more difficult problem due to their size and complexity. The most typical heating and cooling solution is to move air around the building while modifying the air temperature by passing the air over heated or cooled water as required. Such a system consists of a water stage and an air stage.

The water stage is the first step of temperature control. Air is not an efficient medium to heat or cool directly. The most efficient and inexpensive medium that we can heat or cool is water. This water can then be used to change the temperature of the passing air. Heating water is very simple. Municipally-supplied water is pumped into a boiler where it is exposed to heat from oil, gas, coal, or electricity. The hot water is then pumped out into coils that are used for heating the building air. Cooling water is a little more complex and revolves around a device called a chiller. A chiller consists of a compressor, a condenser, and an evaporator. Two separate water circuits exist in the chiller; one circuit removing heat from the building air and one circuit dissipating that heat via a cooling tower.

The air stage is the medium for heat exchange in the building spaces. Air is constantly circulated through a building to either bring in or carry away heat as required. If the air needs to be cooled, it is directed over coils of cool water. If the air needs to be heated, it flows over coils of hot water. Outside air is also vented in at times to save chiller energy when the outside air temperature is cool enough to help the system.

Every building, when designed, presents a different type of heating and cooling challenge. Correspondingly, a wide range of HVAC solutions have been developed over the years, particularly for large buildings.

The most simple and common of all HVAC designs is the single duct/single zone system. This system is designed to supply air at a single temperature to a single large area (or zone) of a building. Some buildings are designed with the entire structure as a single zone. Although this system is simple and inexpensive to construct, the lack of control makes it difficult to keep all of the occupants comfortable, especially if parts of the building are affected differently by wind or sunlight. This type of system also wastes energy when heating or cooling areas that do not require it.

A slightly more sophisticated system is called terminal reheat. These systems send out uniformly cool or hot air to multiple zones in a building. Each zone is equipped with a thermostat and a heating coil. When a zone’s thermostat calls for warmer air, a heating coil is activated to provide the required heat.

Providing cooling is the most complex part of HVAC systems. The two primary components used to achieve this are chillers and cooling towers.

A chiller is the central means of heat exchange between the inside and outside of a building. The chiller serves two basic functions: to cool the air in a building and to provide dehumidification.

From: Electric Motors and VFDs Handbook, Vol 4, The Electricity Forum