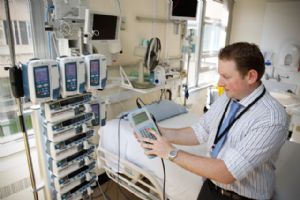 Hospital Electrical Safety
Electrical safety is very important in hospitals as patients may be undergoing a diagnostic or treatment procedure where the protective effect of dry skin is reduced. Also patients may be unattended, unconscious or anaesthetised and may not respond normally to an electric current. Further, electrically conductive solutions, such as blood and saline, are often present in patient treatment areas and may drip or spill on electrical equipment.

A comprehensive plan for electrical safety has been developed for Memorial Hospital. The programme includes selection, inspection, testing, maintenance and calibration of electrical and electronic instruments. In addition, the services of an electrical safety group includes training of personnel as to the general nature of electrical hazards and the safe operation of specific instruments and systems. The whole subject of electrical safety has been a topic of considerable controversy and speculation. Such aspects as the critical current to cause fibrillation, safety devices, techniques and measurement of leakage currents are now being critically evaluated by hospitals, government and national groups and manufacturers. Topics included in this paper are patient protection by use of isolation, insulation and grounding. A survey of present and proposed standards is also discussed.

The biggest problem encountered by hospitals is the leakage of current from devices (usually in an operating theatre setting), or devices that have power levels exceeding normal levels.

In Canada, medical facilities are required to follow the hospital electrical and fire safety standards. Although cell phones are permitted, the use of personal electrical appliances are generally not allowed in the hospital unless approved by the hospital’s administration in special cases, and meeting the criteria of the Canadian Standards Association.

Several codes come into play for hospital safety in Canada:

The National Labour Code
The National Fire Code sets out the requirements for safe maintenance of buildings after their occupation. Drawing heavily on American and, to a lesser extent, on Canadian standards, this code establishes standards for fire prevention, fire fighting and life safety in buildings in use. The National Building Code is essentially a set of minimum regulations for the safety of buildings with reference to public health, fire protection and structural sufficiency. Electricity posed great danger of electrocution when it first came into public use. Over the years a collection of Canadian electrical safety standards has been assembled into what is now known as the Canadian Electrical Code.