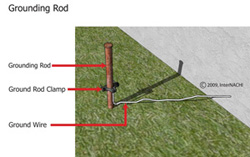 In practice, if any electrical wiring becomes faulty, then the electrical ground absorbs a large portion of the straying electrical current instead of an electrical worker repairing or servicing electrical, computer or electronic systems. But, in order to achieve this, electrical circuits must be secured to the ground or the earth through a qualified electrical safety grounding system or network of systems.