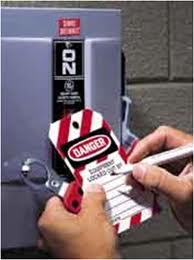 Lockout Tagout is a term that refers to specific electrical lockout procedures that are designed to safeguard authorized employees from electrocution in the event of unexpected energization of electrical equipment and machinery during service or electrical maintenance activities.

Many serious electrical injuries and deaths from electrocution have occurred when an electrical worker thought that a piece of electrical equipment was safely turned off (de-energized) and/or assumed all energy sources were correctly disconnected. This incorrect assumption has resulted in numerous preventable injuries and deaths. Electrocution in the workplace is a serious problem. Each year, more workers are killed from electrocution than the combined deaths of police, fire and emergency rescue personnel. Approximately three million electrical workers service equipment and face the greatest risk of injury if lockout/tagout is not properly implemented.

Therefore, compliance each year with existing lockout/tagout standards in the United States (OSHA Reg. 29 CFR 1910.147) and Canada (CSA Z460) prevents an estimated 120 fatalities and 50,000 electrical injuries for affected employees. Electrical workers injured on the job from exposure to hazardous energy (arc flash) lose on average 24 work days for recuperation. In a study conducted by the United Auto Workers (UAW), 20 per cent of fatalities from electrocution (83 of 414) that occurred among their members between 1973 and 1995 were attributed to inadequate hazardous energy control procedures.

Lockout Tagout
All sources of electricity that have the potential to be unintentionally activated, started or released must be identified and monitored. This is accomplished by installing locks (lockout) or tags (tagout) on electrical circuits to keep electricity from being accidentally activated when it shouldn’t be. OSHA occupational safety and heath standards mandate lockout tagout with OSHA Regulation 29 CFR, Part 1910.147 standard: “The Control of Hazardous Energy and “This standard covers the servicing and maintenance of machines and equipment in which the unexpected energization or start up of the machines or equipment, or release of stored energy could cause injury to employees”.

In general, this standard requires that a source of energy for equipment be turned off, isolated (disconnected), and physically locked out using isolation devices. Bleeding, relieving, or blocking other stored and residual energy must also be done to achieve zero energy state using a safety device. The last important function before equipment service can begin is to verify all energy has been deenergized and/or isolated. - Read More Here: Lockout Tagout Procedures

OSHA states that all employers must have an Energy Control Program, and that "the employer shall establish a program consisting of energy control procedures, employee training, and periodic inspections to ensure that before any employee performs any servicing or maintenance on a machine or equipment where the unexpected energizing, start up or release of stored energy could occur and cause injury, the machine or equipment shall be isolated from the energy source, and rendered inoperative." - Read More Here: Lockout Tagout OSHA

Energy Control Plan
A company's hazardous energy control plan is designed to protect workers and must specifically outline the scope, purpose, authorization, rules, and techniques to be utilized for the control of hazardous energy.

The plan must also include a company's methods to enforce compliance according to osha requirements. At a minimum, the following steps must be taken: