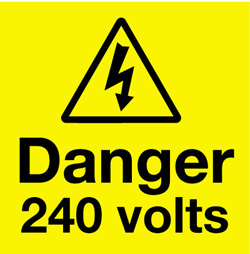 In North America, various federal (OSHA, CSA), and state and provincial laws require that employers maintain safe workplace conditions and practices. This means that under the Occupational Electrical Health and Safety Act, employers, supervisors, and workers individually have legal responsibilities to ensure that all work practices are being conducted in a professional and electrically safe manner.
Electrocution (death by electric shock) happens more often than we’d like to think of at home and in the workplace. Even performing a simple routine task like removing an old light bulb without unplugging the lighting device can be dangerous when any body part touches the live part of the socket. According to the Health and Safety Executive (HSE), roughly 1,000 electrical accidents happen each year. Of these accidents, 30 people die from electrocution, while other victims have their electrical health and safety compromised by either by falling from high places, by being burned, or by being shocked. The severity of each injury depends on the amount of voltage that travels through the body. The electrical current in regular businesses and homes has enough power to cause death by electrocution, which proves why electrical health and safety is important in the home and in the workplace.

Electrical Health and Safety --What happens when skin touches electrical current?
Our bodies produce its own electrical signals that run from the brain to the rest of the body. And, when our body directly touches any electric current, these processes can be interrupted thus compromising our electrical health and safety. For example, your muscles might spasm, your breathing stops or your heart can stop beating. Muscle spasms can cause an elevated worker to fall off a ladder and cause further injuries.

Electrical Health and Safety --What are harmful effects of an arc flash or an arc blast?
Electricity compromises a person’s electrical health and safety with burns to the skin that happen when electrical current comes in direct contact with the human body. An arc flash releases intense heat that causes burns and intense light can make any victim blind. An arc blast can harm the body in the same way, only with more intense heat. Arc blasts also produce pressure waves, which can cause ear drums to rupture or lungs to collapse thus compromising a person’s electrical health and safety.

Electrical Health and Safety --What kind of burns can damage the human body?
An electric arc can cause thermal burns from the intense heat while flame burns can be caused from burning materials that caught on fire or ignited from electrical currents. High-voltage burns can fry internal tissues thus leaving little damage to the outer skin.