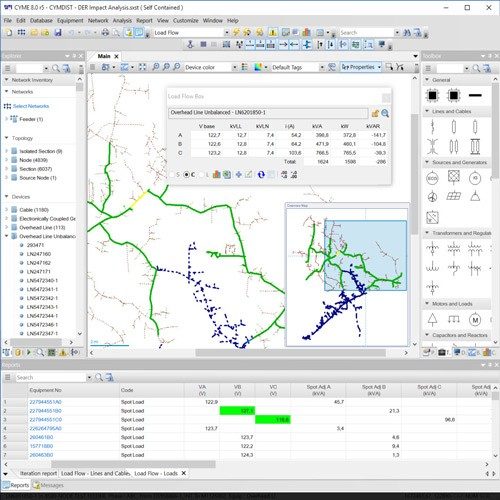 CYMDIST is the distribution automation system analysis base package of the CYME software. It bundles all the modeling and analysis tools required to perform various types of simulations involved in electric distribution system planning. The calculation engines support balanced or unbalanced distribution models that are built with any combination of phases and operated in radial, looped or meshed configurations.

The following analyses are included in the CYMDIST package:

The modeling capabilities of the network editor of the CYME software include the detailed representation of all portions of a distribution network, including the MV primary system, the LV secondary system (radial or meshed) as well as the subtransmission system.

The Distribution Automation Training course is designed to help participants using the software effectively. After participating in this course, participants will be able to:

By attending the Distribution Automation Training workshop day, participants will receive a Full version of CYMDIST software for their use during the workshop. They will have hands-on training to use EATON CYMDIST software in order to conduct the following studies:

We can present this Distribution Automation Training Course to your electrical engineering and maintenance staff, on your premises, tailored to your specific equipment and requirements. We are ready to help design this program for you. Click on the link below to request a FREE quotation.