When capacitors are connected one after each other this is called connecting in series. This is shown below.

We rarely observe any mutual interaction among capacitors. We don't have to worry about mutual capacitance very often, the way we have to think about mutual inductance when working with wire coils.

If we add two or more equivalent capacitances in series (connected parallel), and if one of them has a value many times totally smaller than the values of all the others, then the net capacitance equals the smallest capacitance for most practical charging purposes. 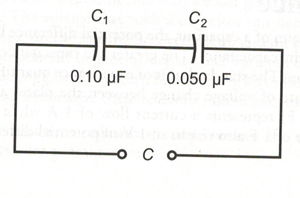 Why the Curved Line?

Do you wonder why the capacitor symbols in Fig. 11-3 consist of one single line and one curved line? Engineers commonly use this noation because, in many situations, one end of the capacitor (the "curved-line" end) connects directly to, or faces toward, a common ground point (a neutral point, with a reference voltage of zero). In the circuit of Fig. 11-3, no common ground exists, so it doesn't matter which way the capacitors go.