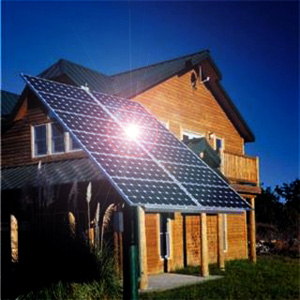 This alternative energy project is a great way to preserve Earth's fossil-fuel resources and an efficient way to reduce air pollution. Another benefit of home PV systems is that it reduces the amount of power bought from local utilities thus making the residence less vulnerable to fluctuating price increases. A drawback to a home PV system are the extremely high installation costs, however, funding could be available from governments as an incentive to invest in alternative power. Unobstructed and clear access to the sun’s rays for most or all of the day is required throughout the year for well-designed PV systems. Location affects performance meaning that the roof of a house must be facing south (best option), east or west. Flat roofs are great options for solar electric systems because the PV modules are flat on the roof facing the sky or mounted on frames on an optimal angle facing south. One option for commercial application includes building structures that can create provide shade (such as window awnings) or covered parking.

Hydrogen could be a valuable energy source in the future, so alternative energy projects are being funded by governments to heat residential homes. One such project, the hybrid hydrogen electrolyzer/high efficiency furnace system works by generating hydrogen from water using electricity. The generated hydrogen is then used to replace the natural gas that is conventionally used in furnaces. These hybrid energy systems can be installed in a variety of houses, including single detached houses.

Geothermal Energy is also being used to provide heat to residential homes. One such alternative energy project, known as the Geo Power System, takes heat from the ground and sends it into the house. This tube-in-tube ground heat exchanger, made from polyethylene and aluminum is inserted vertically into a bore-hole in the ground either in the basement or crawlspace of a house. The alternative energy project is supposed to contribute energy during the winter months and absorb energy during the summer months in the ground.